How One Apparel Company Turns Micro-Moments Into T-shirt Gold

Aside from the New England Patriots’ 35-14 throttling of the Tennessee Titans, last weekend’s slate of National Football League (NFL) playoff matchups yielded amazing tilts, with the Jacksonville Jaguars, Minnesota Vikings and Philadelphia Eagles winning their games in thrilling fashions. Priding itself on preserving “the best moments in sports with fun, clever T-shirts,” BreakingT scored multiple marketing touchdowns through the rapid release of garments that capture the excitement surrounding those victories ahead of this weekend’s conference championship contests.

Because of our geographic location, we at Promo Marketing find it hard to remain neutral in selecting the top pigskin-specific product, as the Eagles, despite being the No. 1 seed in the National Football Conference (NFC), are again receiving points as they prepare to host the Vikings and have thus become even more endearing to us and our fellow fans. They downed the Atlanta Falcons six days ago at Lincoln Financial Field as two-and-a-half-point underdogs and will welcome the conference’s second-seeded club Sunday as three-and-a-half-point outsiders. 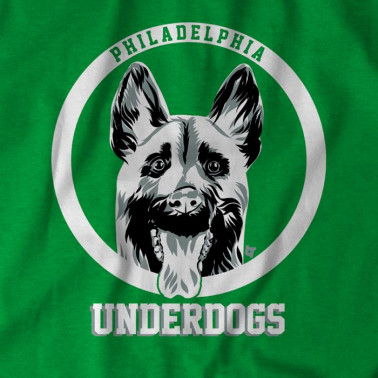 Despite being the NFC's top seed, the Philadelphia Eagles enter the championship game in the underdog role. | Credit: BreakingT

As the Rodney Dangerfields of the NFL, the NFC division champs helped inspire BreakingT to capitalize on their designation as pretenders, as the company, through the playful antics of two roster members who donned German Shepherd masks following the Atlanta triumph, unveiled a top that one could say represents not only the team but also the city at large, since our nation’s first capital often struggles to earn respect.

“BreakingT operates kind of like a newsroom in that we watch all the big games and monitor social data with the intention of capturing the key moments,” president Jamie Mottram said. “When [offensive lineman] Lane Johnson and [defensive end] Chris Long wore the dog masks, it triggered our social alerts like crazy. That was obviously the thing people were responding to.”

How does BreakingT go from micro-moment to T-shirt so quickly? Here's Forbes with an inside look at the process:

He said, "With any BreakingT product, our keys to success are A) identifying the right moment, B) creating the right design, C) getting it to market at the right time and D) reaching a lot of the right fans. We went four-for-four with this one."

But first, they had to see the dogs—rather, the dog masks.

“From there it was just a matter of refining the "Philly Underdogs" idea and kicking it over to our head designer, Nick Torres, who knocked it out of the park,” Mottram said. “This all unfolded over the course of about four hours, start to finish.”

In the City of Brotherly Love, the Philadelphia Underdogs T-shirt has proven a hit, with Mottram adding that it could end up being his entity’s best-selling NFL garment this season. Another has attracted attention, too, as the Home Dogs Gonna Eat offering has helped Johnson continue his mission to assist the Fund for the School District of Philadelphia.

While we love our Eagles and appreciate the tenacity the defense showed in making a goal-line stand when the Falcons appeared ready to justify the betting line, we dare to say the duel between the Vikings and the New Orleans Saints featured a more fascinating conclusion. Yours truly was already pondering how the Birds would stop the Saints, led by surefire Hall of Fame quarterback Drew Brees, when the Vikings made league history, with signal caller Case Keenum heaving a bomb to wide receive Stefon Diggs, who scampered to the end zone to mark the first time a playoff scrum concluded with a final-play-of-regulation touchdown.

True to form, BreakingT quickly commemorated the Minneapolis Miracle with a “Skoly $#*t” T-shirt that humorously immortalizes the improbable connection between Keenum and Diggs. We will not be rooting for a similar celebration or, in fact, any form of joy for the visitors come Sunday night, but we do have to hand it to BreakingT for the novel acknowledgment of how they sent the Saints marching back home on a sour note.

In the American Football Conference, the Patriots are appearing in their seventh-straight conference championship game and will welcome the Jaguars Sunday afternoon for the right to head to Minneapolis for Super Bowl LII. The guests have made believers out of many onlookers following a 10-year playoff drought, with their 45-42 divisional round shootout won over the Pittsburgh Steelers giving BreakingT a chance to be a timely chronicler of their feats. Now, it is nothing like having the Pittsburgh Penguins lose, but a setback for the Steelers makes many Philadelphia residents happy. (Others are lamenting that there is no hope of an all-Pennsylvania Super Bowl.) So, those inhabitants, along with the good people of Jacksonville, will enjoy BreakingT’s Duval South T-shirt, a reflection of the county that makes up the majority of the Florida city, and the fact that the Jaguars picked up two wins this season at Pittsburgh’s Heinz Field.

Going against a heralded foe and the defending Super Bowl champs, the Sunshine State constituents are nine-point underdogs, so if they and the Eagles stun odds makers, it is a given that BreakingT, which quickly put together the aforementioned shirts, will be quite active in the two-week period between Sunday’s games the Feb. 4 Super Bowl. While it is great to commend the apparel entity for its designs, it is better to praise it for the value that its brass gives to providing immediate means to mark a wonderful occurrence. You can bet that such emphasis on timeliness will make anyone in the promotional products industry a “favorite” among eager end-users.