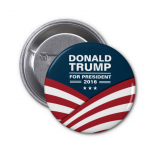 For Don Kriener, selling campaign merchandise is a family tradition. His father and grandfather sold buttons at JFK's 1960 inauguration. According to GQ, Kriener has been in the game since 1988. He sold $218,000 worth of Barack Obama buttons in 2008, making $60,000 in profit, and now he thinks Trump's run for the White House could be his most lucrative campaign to date.

"I've never made this kind of money this early," Kriener told GQ.

He was in Iowa, selling Trump buttons to supporters outside of a rally. He originally planned to sell buttons for multiple candidates, but after spending time in Iowa, he decided to focus his attention solely on The Donald.

He added that he earns about $1,000 per week at Trump events. And, as time goes on, he thinks that number will increase.

"I've worked a lot of places, and he's the only one drawing thousands of people," he said to GQ.

He said he admired that Trump doesn't expect supporters to donate money to his campaign. And while that may be true in terms of direct donations, Trump's merchandise sales make up the lion's share of his raised funds.

According to Business Insider, three-quarters of the $2.6 million Trump has raised from donors in the last three months came from the sale of merchandise, like his "Make America Great Again" caps. Only about $540,000 of that total came from individuals giving more than $200,000.