The Los Angeles Olympics are still eight years away, but it hasn’t stopped major apparel brands from cashing in on the hype now. And, true to the games’ LA locale, brands like Nike and The Hundreds are using the town’s talented creative community to put their own touch on merchandise.

Hypebeast reported that LA28 organizers reached out to the city’s musicians, artists, actors and more to get some input on the official LA28 logo.

Paris was the first Olympic host city to create a logo, in 1924. Since then, the Olympic logo for host cities have ranged in styles from conventional to abstract. For the 2028 Olympics, Los Angeles will do something different: multiple logos https://t.co/LiT1VyEgwT

“Everyone is part of the LA story,” Janet Evans, five-time Olympic medalist swimmer and organizing executive told the Los Angeles Times. “The best way to capture the energy of Los Angeles and the Games is through a collection of voices.”

The committee sent everyone a template of the LA28 logo, and tasked them with creating the “A” themselves. The organizers amassed a total of 35 different logos, with some taking inspiration from the 1984 logo from the last time LA hosted the Olympics. 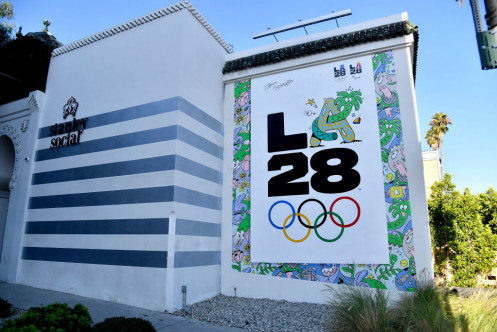 The LA28 Olympic mural by Artist Steven Harrington is displayed on the corner of Stanley street and Sunset Boulevard on September 01, 2020 in Los Angeles, California. The mural is one of three LA28 logo murals revealed throughout Los Angeles to celebrate the upcoming Games of the XXXIV Olympiad. The 2028 Summer Olympics are scheduled to take place from July 21, 2028 to August 6, 2028. | Credit: Getty Images by Frazer Harrison

It might be premature, but it’s never too early to build hype and rally the city around the games. It also gives those brands like Nike and The Hundreds, who are releasing full lines of apparel and bags, plenty of time to keep cranking out merchandise as more designs may come in.

Welcoming the Olympics back to Los Angeles for the first time in 44 years. LA28 by @bobbyhundreds is available now while supplies last. #LA28 :: https://t.co/t6t1DNEN69 pic.twitter.com/FZmP9c8tKv

From a sales standpoint, having so many options just might make people try to collect as many permutations as they can—or maybe even pay top dollar for their favorite’s design.

Plus, all of these logos help guard against a debacle like the Tokyo Olympics faced with their original design, too.