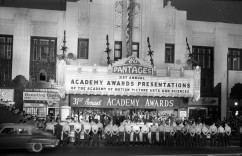 We've dug into the Oscars gift bag and all of the extravagant (and expensive) stuff inside of it. But the gift bags didn't just materialize. As we know, assembling the bags was a somewhat controversial topic last year due to the bag's sort of official-yet-unofficial status. And it's pretty interesting just how Lash Fary, founder of Distinctive Assets, puts together the bags for Hollywood's biggest night.

As the Washington Post put it, the company's business plan "is a self-fulfilling prophecy."

The companies who want their products included pay a minimum of $4,000. Basically, they're paying to put their goods in front of some of the most influential folks in the world. If you knew your product was going to go home with Meryl Streep or Tom Hanks, that's a fairly sound investment.

Even as the Oscars just happened a little more than a week ago, Fary and Distinctive Assets are already looking for companies to submit their products for next year's event.

Fary explained to the Washington Post that the companies that did shell out the money to get their products in the bag "hope that the stars will love their product," or, in the case of advertising a retreat or trip, the recipient will "show up and sprinkle stardust on it."

It's a combination of promotional marketing the way distributors put branded merchandise in the hands of potential customers and using celebrity spokespeople to boost the reputation of a particular brand.

If you're trying to market a product, would you rather pay for a billboard in a prime location, or would you want to ensure your product goes home with George Clooney?

And, even though we just did our roundup of some of the most eye-catching items in the 2018 model, there's one item that still makes us think about larger implications in the promotional and gift space: the legal marijuana given backstage from Flow Kana.

Flow Kana donated jars of legal cannabis (because it's legal in California) and pre-rolled joints for attendees to use in dressing rooms. The company even got permission from the Academy Awards and the Dolby Theater.

While having a product included in the Distinctive Assets bag comes with a price tag, there's no word on whether Flow Kana had to donate to get its products in the hands (and lungs) of performers.

Being that the Oscars are one of the highest profile events in U.S. pop culture, this is a huge step for legal marijuana. If a company can get its products on that stage (well, backstage) with the permission of the theater as well as the association holding the event with a gigantic reputation on the line, it paves the way for legal marijuana to be used as promotional material, especially as more and more states relax their laws and go the way of full legalization.

Sponsor Content In-Person Events Are Back. Is Your Brand Ready?
Comments
The Top Lists