Seeing all of the new Emmy nominations just reminds us how far behind we are when it comes to TV shows. There are just too many shows nowadays, and not enough time. We just have to admit that we’re not going to watch some things, no matter how good everyone says it is. (We’re looking at you, “Mad Men.”)

There are also too many good promotional products in the world to appreciate all of them, but we try our best every week. So, get a load of this week’s haul, won’t you?

If anyone knows how excited Buffalo is to host the Toronto Blue Jay, it’s one of Buffalo’s biggest sports enthusiasts. 26 Shirts founder Del Reid says a new t-shirt design inspired by the Jays is one of his best selling items.https://t.co/X3vODYg5sh

Due to COVID-19, the city of Toronto didn’t want the Blue Jays hosting baseball this season. So, the team went and found a temporary home in nearby Buffalo. The city welcomed them with open arms, and one local apparel company even made T-shirts to commemorate the occasion.

Blockbuster Sweatpants are available now at bendblockbuster.com They are locally made jogger sweatpants going for $35 every order made helps support and keep the last blockbuster open!💙💛

A post shared by The Official Last Blockbuster (@blockbusterbend) on Jul 6, 2020 at 3:17pm PDT

When we hear the name “Blockbuster,” it instantly brings us back to our childhood and walking through the aisles to pick out a new movie to rent. But now, there’s only one remaining Blockbuster store in the world, all the way in Bend, Ore. The store is selling branded merch including sweatpants, tote bags, T-shirts, hats and more. Who wouldn’t want to chill out in a pair of Blockbuster branded sweats?

Purchasing #SeaKraken merchandise not only lets you rep the @NHL's newest franchise - it also helps make a positive difference in the lives of some of our region's most vulnerable youth.

Full transparency: We weren’t that enthused when the NHL's newest team announced its long-awaited nickname. But once the logo and uniform designs came out, we couldn’t deny how good it looked. The color scheme is on point for Seattle, the “S” logo is awesome, and the secondary anchor/Space Needle logo is just genius. When the team announced it would donate net proceeds through Aug. 21 to local nonprofits, we were even more on board.

If you’ve never had an AriZona iced tea before, what are you waiting for? If you’re a fan of the brand, then you’ll know how iconic its floral print is. The company recently launched a pair of men’s “Blossom Swim Trunks” (with this nearly identical print), as well as a T-shirt and oversized beach towel. There’s still plenty of time left this summer to grab some AriZona merch, which is perfect for the beach, lake or pool. 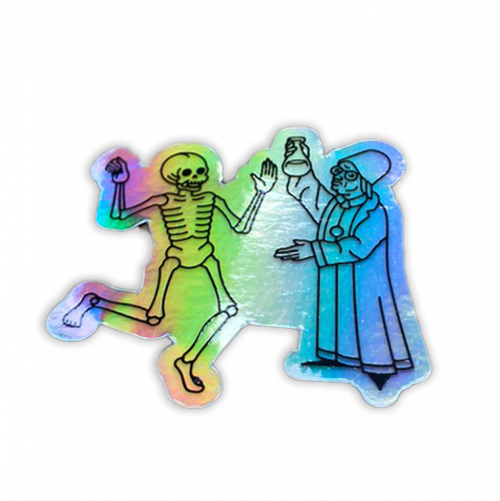 We’ve thrown in some Reanimator merch in these lists before. Not only because their coffee is our (Brendan’s) favorite, but because their branding is so good. This holographic sticker just adds another level. We could stare at it for hours.

Our 5 Favorite Promotional Products of the Week: KFC Lipstick, LEGO Nintendos and More