Our 5 Favorite Promotional Products of the Week: Air Fresheners, MTV Shirts and More

Ah, Labor Day. We used to love the holidays that involved candy, but as we get a little older, we’ve come to appreciate the cookout holidays more. Yes, it marks the end of summer, but there’s still plenty of time for outdoor activities on the horizon.

Before we get too swept up into our day dreams of hot dogs and cold beers, let’s look into some of our favorite promotional products from the last week, shall we?

One of Brendan’s favorite spots to skateboard in Philly is a little DIY spot under the SEPTA train tracks. In order to fund some repairs, the guys who made the park happen created an awesome T-shirt, with all proceeds going to concrete and labor.

2. The Weeknd 'Beauty Behind the Madness' Merch

Celebrating the 5-year anniversary of Beauty Behind The Madness. Available now at https://t.co/aqBvSe8PH4 pic.twitter.com/dGauohlmQL

Five years ago, The Weeknd released the album “Beauty Behind the Madness,” which is still one of the greatest albums of all time—OK, maybe this is just our opinion, but c’mon, it was pretty dang good! The alternative R&B artist since has launched merch items in honor of this 2015 album, which included sweatshirts, jackets with the XO logo, T-shirts and more. Unfortunately, if you were interested in grabbing some merch, it looks as though the items are no longer available on his website. 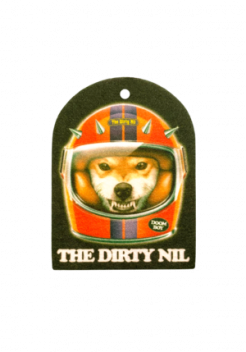 Brendan and Sean are both very into this band. For our money, they’re the best thing Canada’s produced since hockey. If you buy the 7” of their new single “Doom Boy” from Dine Alone Records, you’ll get one of these cute little air fresheners. It’s peach-scented, which everyone knows is the most rock n’ roll scent.

There’s something cool about being so on-the-nose when it comes to awards show attire. Lady Gaga went uncharacteristically casual in just an MTV T-shirt, but the retro vibe is pretty awesome.

Everyone knows the gadgets are the coolest part of the James Bond movies. OK, the cars are cool, too. So is Daniel Craig. But regardless, this digital clock looks like something 007 might use to wake up in the morning before running across the roofs of Malta chasing a bad guy or something.