It’s here: The spookiest time of year. October means we can watch all the horror movies we want, but we still choose not to because we like to sleep at night. We respect all you horror fans out there, but that’s just not our bag. (That might not even be true—Brendan wrote this intro, so he’s speaking for the entire group.)

You know what isn’t scary? Promotional products. We can’t think of a single nightmare we’ve had about them. If you’re a distributor, you’ve probably had a few involving missed shipments or something like that. Or maybe you’ve even had a dream about a bobblehead that came to life. Actually, that’s not a bad movie idea. Forget you read that.

Distract yourself from stealing our movie ideas by reading this week’s edition of our five favorite promotional products: 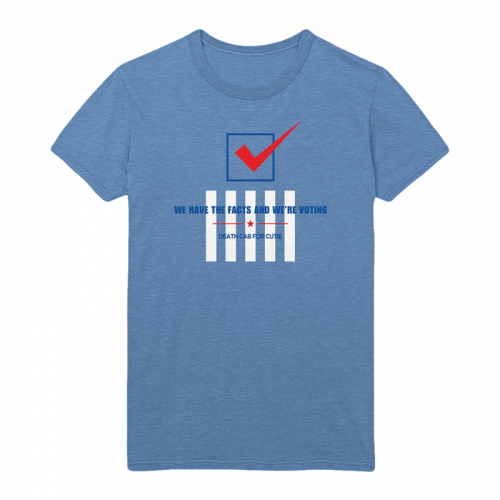 Seattle indie rockers Death Cab for Cutie are referencing their own album title “We Have the Facts And We’re Voting Yes” for this T-shirt to encourage people to get out and vote on Nov. 3. The limited run tee was only available until November, but it’s already sold out.

Vans has been crushing it with collaborations lately. It helps when you’re one of the most recognizable footwear brands on the planet, and you have such a good canvas (literally, for some of its shoe styles) for branding. This collaborative line with the Museum of Modern Art is a real masterpiece.

We’re suckers for anything and everything LEGO. So when we saw Levi’s was using LEGO bricks for a new line of apparel and accessories, we got excited. Denim is all the rage right now, too, so it’s smart on LEGO’s part.

LeBron is doing a lot to win over the Lakers faithful, and not just by bringing them to the brink of another NBA championship. LeBron paid his respects to one of the greatest to ever wear purple and gold with this pregame T-shirt.

Fernando Tatis is one of the most exciting hitters in baseball right now. If you’re not having fun watching him crush dingers and flip the bat, you’re just not a true baseball fan. Padres fans can celebrate Tatis’ masterful flip with this tee.