Is everybody ready for Halloween? Whether you're taking the kids trick-or-treating, hanging out and watching scary movies or just enjoying the abundance of candy, it's a fun time of year. We hope you enjoy some of these promotional products we've seen around as much as you're enjoying the spookiest time of year. 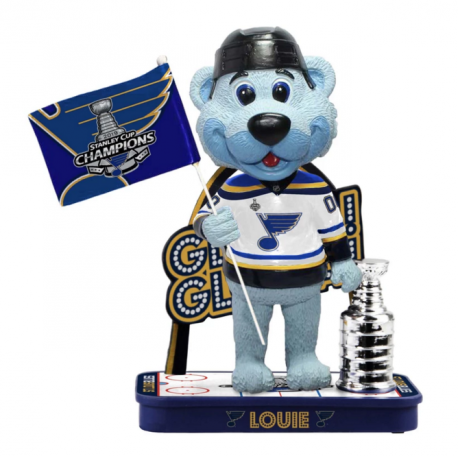 The St. Louis Blues captured their franchise's first Stanley Cup championship in June, and this bobblehead of their mascot, Louie, honors the achievement. It also includes a backdrop that proclaims "Gloria! Gloria!," an utterance that we here in Philadelphia take full credit for inspiring.

There’s only one thing that’s better than Halloween pet costumes, and that’s being able to match your furry friend! Club Huey designs a number of holiday pet collections, and some of them even come in human sizes, too, like matching “Dunder Mifflin” shirts or tees with the classic 1996 scene from “Scream.”

We’re pumped for Halloween, even if it only means curling up on our couch watching “Hocus Pocus.” The only thing that would make it better would be wearing the Sanderson sisters T-shirt or the bell-sleeve hoodie from this Hot Topic collection.

I am not throwing away my slap shot 🎶🏒😄
A #Hamilton #bobblehead = this is the Friday night freebie at the @mkeadmirals game❗️ pic.twitter.com/SgFvNV4YUP

We often sing the praises of Minor League Baseball, but the American Hockey League's Milwaukee Admirals are no slouches in the promo world thanks to novel bobbleheads. The Nashville Predators affiliate continued to delight fans on Friday by distributing bobbleheads of founding father Alexander Hamilton, the inspiration behind the hit musical that is playing in Milwaukee through Nov. 17. Look at that adorable little Admirals jersey!

The defending NBA champions kicked off their 25th season last week, and a couple coins, priced at $29.95 and $99.95 (!!!) and issued by the Royal Canadian Mint, are paying tribute to the anniversary. The higher-priced coin honors the club's initial logo, while the other features the current claw symbol. Both also feature a league authenticity hologram.