Our 5 Favorite Promotional Products of the Week: Coasters, Chicken-Scented Firelogs and More

1. Lamar Jackson's 'The North Is Not Enough' T-shirt

Lamar Jackson comes to media room with a “The north is not enough” T-shirt pic.twitter.com/qOFOKVLSJl

The Baltimore Ravens claimed their 10th straight win last Thursday to win the AFC North crown. Pro Bowl quarterback (and likely league MVP) Lamar Jackson donned this shirt in his post-game press conference to show that he intends to keep the team rolling all the way to Super Bowl LIV. 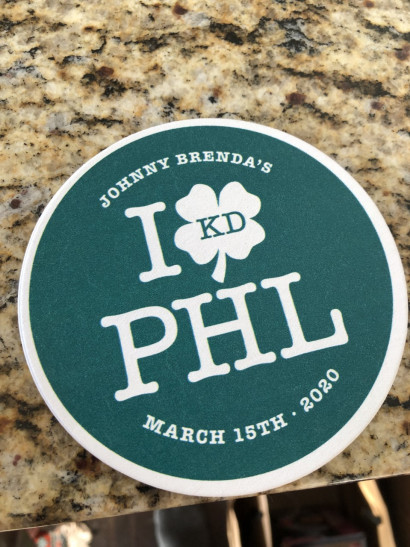 Brendan went to see Brooklyn-based singer/songwriter Kevin Devine here in Philly the other night. To announce an upcoming show in town later this year, he gave out free coasters at the merch table.

Oskar Lindblom, a promising young player with the Philadelphia Flyers, was recently diagnosed with Ewing's Sarcoma, a form of bone cancer. In solidarity, his teammates plan to wear "Oskar Strong" T-shirts under their jerseys, and revenue from fan sales of the shirt will assist the Hockey Fights Cancer cause.

Arby's has launched it's first-ever holiday shop, and if you're wondering, yes, there is a holiday sweater, and no, it's not sold out (yet). Some Arby's fans were also lucky enough to get their hands on the "All The Meats" wrapping paper, which has a design featuring, well, all the meats.

This is really going to spice up Christmas morning 😂https://t.co/fLt97hxX5F

We're not sure why anyone would want a fire to smell like something other than a fireplace. But, if it's going to smell like anything else, fried chicken isn't a bad option.