This post always comes out on Wednesdays, so we can’t throw in any good “May the 4th" references. Oh, wait. It’s Cinco de Mayo! Wow, what a one-two punch of great days. You have Star Wars one day, and then you go to sleep and wake up on the ultimate fiesta day of the year.

Yep, nothing beats the first week of May. But, as we’ve said before, just about every day is a good excuse for promotional products. Here are five that we liked this week. 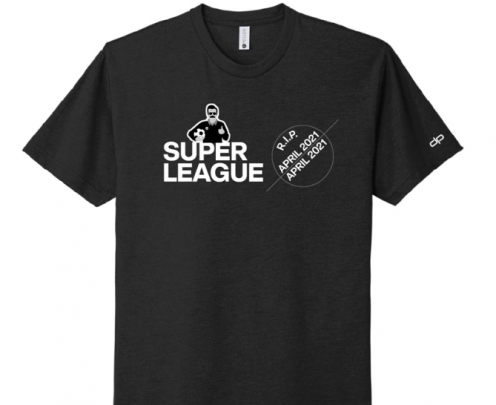 It was announced, it was almost universally hated, and then it was dead. The proposed European Super League—which would have consisted of a handful of elite soccer teams from England, Spain and Italy—caused uproar across the pond and some support in the States. (Americans just don't understand the beauty of promotion and relegation.) To commemorate the most important league that only lasted a few days, sports radio icon Dan Patrick released these T-shirts.

Matty Matheson is an over-the-top Canadian chef who is covered in tattoos and cooks some of the tastiest looking food in the world. At his Meat+Three restaurant in Canada, customers could land this branded golden ticket Wonka-style in their takeout bag and win a one-on-one cooking class with the man himself.

This has gotta be up there with one of the best ballpark giveaways ever. A+ @BKCyclones. @JerrySeinfeld pic.twitter.com/5IhCxxFkKM

Remember Kramer’s statue of Jerry Seinfeld made of Fusilli noodles? Of course you do. Who wouldn’t want their own version of the statuette at the ballpark, especially in New York City? There’s very low risk of George’s dad sitting on it there, too. Minor league baseball, you've done it again.

Don’t have a cow, man. Just give yourself two minutes of self care with these branded “Simpsons” toothbrushes.

I discovered the @consolevariant website today thanks to the latest @didyouknowgamin video and I can't get enough of it.

I learned today that there were special PS1 editions of Men in Black and Nutty Professor II: The Klumps made! @NightPromoting check these out! pic.twitter.com/g126xBoblP

Look, we’re going to level with you. We get the “Men In Black” branded console, considering it came with a game based on the movie. But can someone explain why there is a “Nutty Professor II: The Klumps” PlayStation? I mean, aside from it being awesome, that is.