How are we feeling, soccer fans? Excited for Italy’s win against the country that invented the sport? Bummed for England having to lose in front of their home fans? Indifferent as a non-soccer fan?

We think the best part of the Euros final wasn’t the actual game (which was entertaining), but the shots of fans in various costumes or other get-ups. We personally enjoyed the Italian fans dressed as Mario and pizza.

Maybe having the spirit of Italy’s favorite plumber pushed the Azurri to victory. Or maybe it was just something fun for the viewers at home.

We actually have something Mario-themed in today’s edition of the Faves. So let’s-a go!

Everyone always says the parking lot before a Grateful Dead show is part of the experience. Imagine pulling a hoagie or a cold beer out of this cooler. Now that, to use a genius play on words, would be cool.

This co-branded watch has a built-in heart rate monitor, a compass and an accelerometer. Plus it's water-resistant and has two straps. It’s really the only watch you need to save the princess (yet again!!!) from Bowser.

Black Plague Brewing is a brewery partially owned by professional skateboarders. So it only makes sense that they pay homage to the godfather of the sport through a new branded release. As far as beer labels go, this is probably the coolest we’ve seen. (But we’re biased because we think Tony Hawk rules.)

This is one of those promo products that make you think, “Wait, what? Why do you have that?” Why not? It’s a perfectly functional spoon and we like to hum “Kiss From a Rose” while we eat with it. 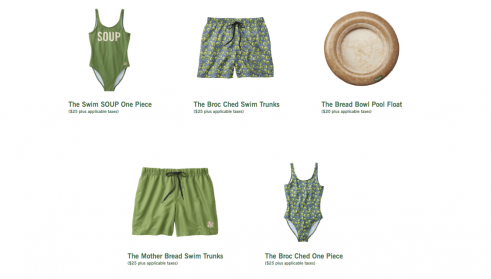 We’re just about in the dog days of summer, so we need some good swimwear. Heck, we could use a pool float, too. What’s that? It’s shaped like a bread bowl? Even better.