Our 5 Favorite Promotional Products of the Week: Public Transit Stress Relievers and More

The biggest day in advertising is right around the corner. That's right—Super Bowl Sunday. It's basically the Super Bowl of advertising!

For those of us who keep our eyes out for solid promotional items, we don't have to wait for one year to celebrate clever advertising. We get to do it every week! This week's edition includes public transit stress balls, fan bobbleheads and Chinese New Year packaging.

I never thought this moment would come into fruition but @BobbleheadHall reached out and we decided to make this happen for you #ChiefsKingdom! Truly an honor!

Watching a favorite team lose in person always stinks, and Charles Penn seemed on his way to doing that when his beloved Kansas City Chiefs fell behind 24-0 in their AFC Divisional Round game against the Houston Texans. Videoing his departure from Arrowhead Stadium so as to cheer them on from home, he missed the squad's amazing comeback, leading the National Bobblehead Hall of Fame and Museum to immortalize him via its Bad Luck Chuck creation. Set to ship in May, it could be a funny novelty item to own if the Chiefs defeat the San Francisco 49ers in Super Bowl LIV.

Inspired by the #LunarNewYear, Zhang Huan designed a collaboration that's as pleasing to look at as it is to savor. pic.twitter.com/6li0MxedqH

To celebrate the Year of the Rat, Hennessy teamed up with Chinese artist Zhang Huan to create a festive limited-edition packaging. 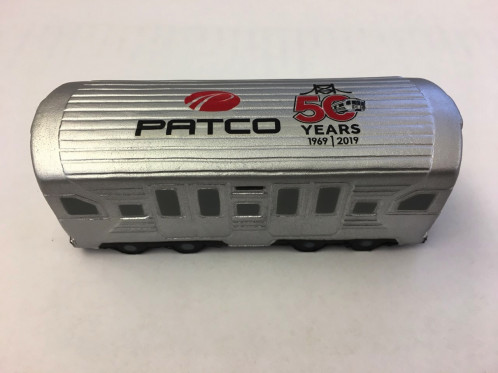 Relying on public transit is stressful. PATCO, the commuter rail line that runs from Philly's South Jersey suburbs into the city proper, realizes that. In a meta promotional move, the line distributed these train-car-shaped stress reducers this morning. The dual imprints on the top (one for the PATCO logo and one for its 50-year anniversary logo) are a nice touch, but the contact info for PATCO's 24/7 customer service line on the bottom should really come in handy.

'Baby Yoda' has earned endless love through his appearances on "The Mandalorian." What better time, then, is there to celebrate that affection than Valentine's Day? This $34.95 "Be Mine" sweatshirt will warm hearts and score lasting impressions far beyond Feb. 14.

The Wizards got a gem in their Japanese forward Rui Hachimura. Celebrating both Hachimura and DC's Japanese community, the team is giving out this anime-inspired tee for Japanese Heritage Night on Feb. 3.