Let’s just say we’ve been avoiding all of our usual sports beats on social media, and have had some extra time and incentive to hunt for fun promotional products across the web and in real life. This week’s haul is a good one, if we may say so ourselves. (We do say so. It’s our magazine.)

Dave Grohl loves him some rock n’ roll nostalgia, doesn’t he? The Foo Fighters frontman and everyone’s cool uncle is releasing a new line of merchandise to celebrate the band’s 25th anniversary, and it includes plenty of old merch designs, re-imagined designs and more.

The Denver Broncos have a South Park section today at Empower Field.

Sports teams have been using cardboard cutouts of fans to make the games feel less empty. Usually they’ll take pictures of real local fans. The Denver Broncos sort of did that, taking their fictional local fanbase and putting them in the seats of Mile High Stadium. (Everyone even wore masks—even Kenny, whose face is already covered. You can never be too careful.)

Speaking of football, the Buffalo Bills have been celebrating each win (remember those, Philly?) by holding up a custom banner with a message on it. So far we’ve seen “Keep Buffalo a Secret,” “Stay Hungry” and “Big Dubs.” The banner campaign is a collaboration with local company Oxford Pennant. Oxford Pennant works with the Bills’ staff to create a theme for the week. If the Bills win, they hold up the banner.

And speaking of rock n’ roll, who can forget David Brent, the star of the original U.K. “The Office,” whose sales career came second only to his love of music. These postcards unearthed by Ricky Gervais advertise Brent’s “hit” singles “If You Don’t Know Me By Now” and “Freelove Freeway.” 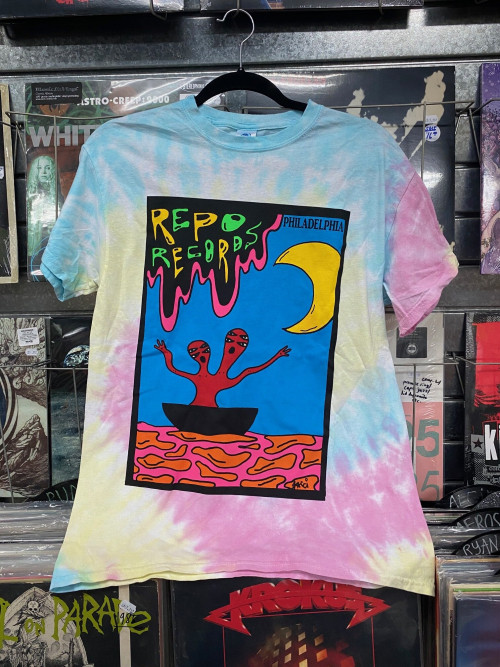 One of our favorite local record shops in Philly has been selling these groovy tie dye T-shirts for a little while now. Tie dye is all the rage again (much like vinyl), so this design is perfect.