Working from home, we’ve had plenty of time to ruminate on what makes a good promotional product. Not that we don’t do that every single day, but staring out the window at a quiet Philadelphia just puts us in a deep-thinking mood.

So what makes something stand out to us? Is it humor? Is it a reference to something we love? Is it just pretty colors and solid design? The answer is a resounding, “Yes, all of the above.”

While we won’t write a five-page essay with at least 10 in-text sources on what makes a good promotional product, we can at least show off some of our favorites from the past week or so.

As in, I Wonder what happened to the SeaWolves. https://t.co/z4OeucAYph

If you haven’t ever seen “That Thing You Do!” please take this time to watch it immediately. The songs will be stuck in your head for all of eternity, and it’s one of the most charmingly funny movies in decades. Tom Hanks wrote and directed it for crying out loud! Anywho, the Erie Seawolves Minor League Baseball team announced that it would rebrand as The Wonders, the movie’s fictional Erie band, for a game next season. Wonders “drummer” Tom Everett Scott even got in on the joke with a hilarious reference. 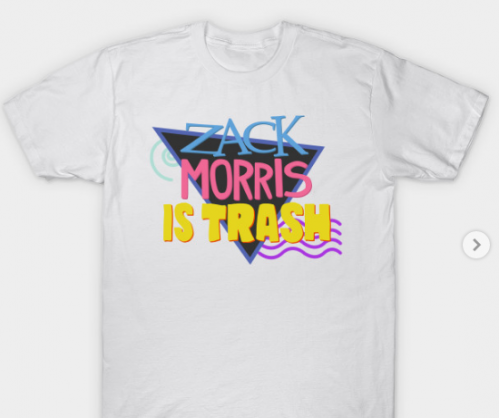 Owing to our current stay-at-home status, we have connected with various forms of entertainment, including the Funny Or Die video series that trashes Zack Morris, the central character of "Saved by the Bell.” The series has commemorated the constant schemer's duplicity through various items, including this T-shirt.

100% of profits to be donated to the #COVID19 Solidarity Response Fund for the @WHO, powered by the @UN Foundation. #WorldHealthDay pic.twitter.com/e4TvBX1YaS

Yesterday, former One Direction star Harry Styles released a T-shirt that directly benefits the COVID-19 Solidarity Response Fund for the World Health Organization. The white T-shirt has the text “Stay Home. Stay Safe. Protect Each Other” on the front, and is available for $26. As of now, it’s a pre-order item and is expected to ship in four to six weeks.

OK, this one isn’t from this past week, but the tweet is. Fans of ‘Airplane!’ would probably love to have this in their homes. We know we would. The only thing missing is a Kareem Abdul-Jabbar—I mean Roger Murdock—action figure.

If you’re a fan of the show “Vanderpump Rules,” then you certainly know all the hype around the restaurant Tom Tom. Tom Schwartz, partner of the restaurant, announced on his Instagram page that they’re selling hats with a Tom Tom logo. Schwartz mentioned that the team at FanJoy (where the merch is being sold) partnered with Feeding America to provide 10 meals for every hat order. The hats are already sold out, but there are still some other items listed on the FanJoy website.