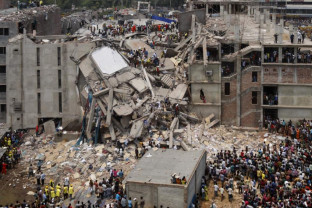 The Rana Plaza collapse killed more than 1,100 people and injured more than 2,400. | Credit: Flickr by rijans

Sohel Rana, owner of the Rana Plaza garment factory, which collapsed in 2013 and killed more than 1,100 workers, has been sentenced to three years in prison for corruption on Tuesday. The BBC reported that Rana still faces further charges, including murder, for the disaster.

"This is the first time he has been convicted and jailed," prosecutor Salahuddin Eskander said, according to Al Jazeera.

Rana was reportedly arrested four days after the incident, while he tried to flee to India.

Rana constructed two factories, including the one that collapsed, with money he obtained from undisclosed sources, thus pushing the corruption charge. If found guilty of murder over the collapse, he and 37 others could face the death penalty in Bangladesh. The trial has been delayed by appeals. And Rana's attorneys say he will appeal the verdict.

"He was in custody when he was served the Anti-Corruption Commission notice to submit his wealth statement," his lawyer, Faruque Ahmed, said. "In the jail, he was not given enough time to meet his lawyer or his family."

Rana also has been charged with violating building codes when expanding the structure by an additional three floors. Investigators blamed this haphazard construction for the collapse.

"It has been four years since the tragedy, and still this trial has not begun in full swing," Kalpona Akter, head of the Banglasdesh Center for Worker Solidarity, told Al Jazeera. "He is a cold-blooded murderer. He forced workers to work in a death chamber."