According to Forbes, Chouinard has long been a champion of environmental conservation, and Trump's latest decree is one that he does not take lightly. In response, Patagonia's home page went dark, and featured a prominent message: "The President Stole Your Land. In an illegal move, the president just reduced the size of Bear Ears and Grand Staircase-Escalante National Monuments. This is the largest elimination of protected land in American history." 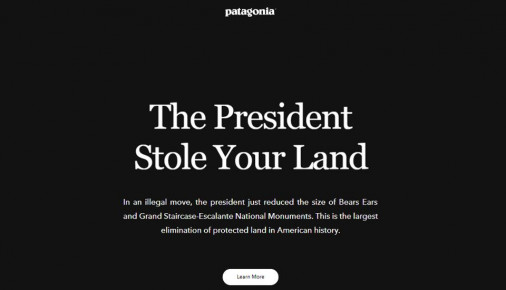 Chouinard told CNN on Tuesday that he plans to take the White House to court.

"I'm going to sue him," Chouinard said. "It seems the only thing this administration understands is lawsuits."

Chouinard is not the only one to sue the president over the federal lands in Utah. Ten environmental organizations, including The Wilderness Society, Sierra Club and Grand Canyon Trust, filed a suit on Dec. 4.

When Trump announced the administration would be abandoned, the notification read, "Some of the objects ... are not unique to the monument, and some of the particular examples of these objects within the monument are not significant scientific or historic interest."

Trump also explained at the Utah State Capitol that his decision, known as the "Presidential Proclamation Modifying the Bears Ears National Monument," came as a result of "harmful and unnecessary restrictions on hunting, ranching and responsible economic development."

Other outdoor retailers also expressed their dissatisfaction with Trump's decree by adjusting their home pages, and The North Face even launched a Kickstarter campaign to raise $100,000 for the Bear Ears Education Center.