In Case You Forgot: Roy Halladay Pitched a Perfect Game In a Stadium Full of Promotional Tambourines 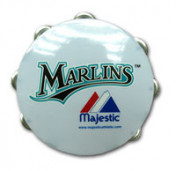 Roy Halladay pitched a perfect game despite being surrounded by thousands of tambourines. | Credit: Miami Marlins

On May 29, 2010, Roy Halladay pitched a perfect game against the (then) Florida Marlins. It was the 20th perfect game in MLB history, as well as the second in Phillies franchise history (and of the 2010 season, strangely enough).

After revisiting Halladay's dominant performance against the Marlins following the future hall-of-famer's tragic death in a plane crash on Nov. 7, I noticed something about the crowd. It was loud. And it wasn't the "Wow, we're potentially watching a perfect game" kind of cheering. It wasn't that a bunch of Phillies fans made the trip down to Florida to watch the game. It was a distinct, rattling sound that at first made me think that something was off on the audio.

And then, during the 4th inning, it all made sense. The Florida Marlins had given away branded tambourines to the first 15,000 fans in attendance.

I time-cued the video for you:

Want to hear it at it's loudest? Check it out as Halladay closed out the 8th inning. (It's cued up for you again.)

The Marlins seemed to have had a thing for noisemakers at the time (perhaps to make up for lackluster attendance.) After the tambourine giveaway, the Marlins gave out miniature vuvuzelas similar to those given out at the World Cup in South Africa that year. Remember those? Soccer fans will remember those games sounding like they took place in a beehive.

Those were so annoying.

Thanks to the historic nature of that night in Florida, those promotional products likely are a keepsake for Phillies and Marlins fans alike. Even if Halladay hadn't achieved the peak of pitching ability that night, that's a fun idea for a sports giveaway.

And now, due to Halladay's tragic death at the age of 40, those giveaways could be an even more treasured keepsake for those looking to remember one of baseball's most dominant faces.

I certainly wish I had one.