The San Diego Padres were forced to recall giveaway beach hats last weekend after the organization found grain beetles in some of the items' packaging.

Updated statement from the Padres regarding tonight's giveaway: pic.twitter.com/6zPfApz7BO

According to the San Diego Union Tribune, fans at Petco Park received a voucher to get a replacement (and hopefully bug-free) beach hat mailed to their home. The team unfortunately already handed the items out before realizing the mistake, but ushers came around in the third inning with plastic bags to collect them.

Some fans really didn't want to wait for replacements, though, as the Union Tribune reported that "some fans were seen hiding their hats." This speaks to the power of a promotional campaign, albeit in a kind of gross way. They were going to get the new hats—did they really need to risk grain beetle infestation for the sake of instant gratification? 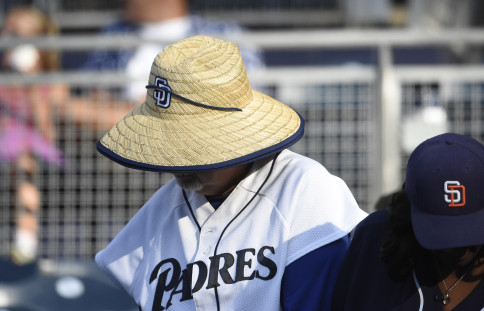 A fan wears a giveaway hat in the stands before a baseball game between the San Diego Padres and the Colorado Rockies at PETCO Park on September 1, 2018 in San Diego, California. A problem was found with the hats and they were recalled in the third inning. | Credit: Getty Images by Dennis Poroy

Apparently, the answer was yes. The Padres did, however, reassure fans that the insects are harmless.

"We have been advised that grain beetles pose no health risks to humans, but we decided to act out an abundance of caution," the team's statement said.

While they can't hurt humans, this is the most common way they make their way into homes: through packaging.

While the Padres would like their fans to know that grain beetles pose no risk to humans, I would like to emphasize that they are, in fact, gross beetles that get into your cereal and elbow macaroni, and that’s a kind of psychic harm from which a person may never recover. Exterminators say the disgusting bugs usually get into your home via packaging that was infested at a grocery store, and that once in your home they will “quickly spread to other bagged or boxed products,” until one unfortunate morning you pour out a fistful of beetles in your bowl of Milk and Honey Original Café Mix and immediately fall over dead from pure horror.

This was a bizarre situation, a stroke of bad luck neither the Padres nor their promotional partners could have planned for. Thankfully, everyone handled it swiftly and appropriately, so no one is at risk of further infestation. Kudos to all involved for catching it quickly, handling it responsibly and coming up with a back-up plan to ensure fans still got their hats.