For the release of "An Inconvenient Sequel: Truth to Power," Paramount Pictures has teamed up with Alternative Apparel and artist and designer Shepard Fairey—whose work has appeared on other politically-centered merchandise—to create an exclusive tote bag.

The company only created 75 of the bags for Friday's release, and the bags are made from eco-friendly fabrics consisting of jute and cotton blend, according to WWD. 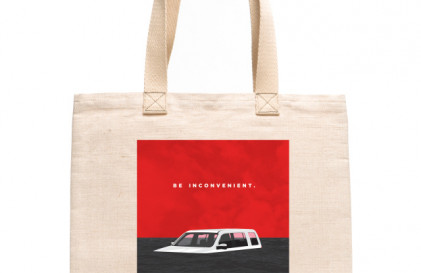 Additionally, Paramount received 100 bags to use as it pleased (likely promotional), but not to be sold.

Victoria Yarnish, supervising director of the Fairey Companies, told WWD that Fairey was interested in working with a project related to climate change and environmental issues, and that drew him to this particular project.

This is an interesting example of using a promotion's core goal to recruit big-name designers and people to a project for the sake of getting the client's name out there. By appealing to Fairey's desire to work on an environmentally-conscious project, the producers of the film will get more attention for the movie, and the fans will have a quality tote bag to show for it.