Ron Weaver is president and CEO of Apex Advertising, a full-service promotional products marketing agency with annual revenue of $24.6 million, offices in nine states and a team of 65. But on this day in mid-December, it was a trio of kindergarteners running the show.

Not that Weaver minded ceding control. A few weeks earlier, a charity called Brodie’s Good Vibe Tribe had told him about a Christmas gift list for youth patients at the Cleveland Clinic, a nonprofit medical center in Ohio. One of the patients was a 1-year-old boy who had just received a pediatric heart transplant. His shopping list included gifts not just for him, but for his 6-year-old sister. That’s how Weaver came to be standing in the toy aisle of his local Target, serving as an assistant to his daughter and her friends.

“My daughter was turning 6 years old on Christmas Eve, and I thought it would be a great idea to explain the project to her and let her go on a shopping spree at Target as a personal shopper for the sister,” Weaver says. “On the way there, we picked up two of her friends, and over the next hour, the trio hand selected each item from the gift list. As the girls ran through every kids’ aisle, they had conversations about giving, bringing joy to the little girl and hoping their efforts would make her Christmas. They didn’t ask for anything for themselves and put total focus on finding the best gifts possible. To this day, my daughter still asks how the little boy and his sister are doing, which is a proud dad moment for me, but also shows the impact this day had on her, let alone the family that received the packages two days before Christmas.” 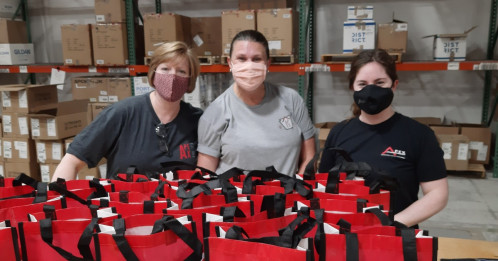 This was exactly the kind of thing Weaver had been hoping for when Apex launched its #Apex30for30 initiative earlier that year. In late 2020, as the company was preparing for its 30th year in business, Weaver and the Apex leadership team felt like they needed to do more than a typical anniversary celebration. The pandemic was still in full swing and businesses were on uncertain footing. Charities were desperate for extra funding and volunteers. A company party and a congratulatory press release just didn’t feel right.

“As we started to brainstorm ideas on what our 30th year anniversary celebration would look like for our company and staff, we realized we needed to make our 30th year more about others than ourselves, based on who we are and what was going on in the world,” Weaver says.

That’s when #Apex30for30 started to take shape. The idea: 30 acts of kindness—one for each year the company had been in business. Apex first partnered with Aaron’s Acres, a local organization that serves children and young adults with developmental disabilities, to provide PPE for its summer programs. The Apex team then began contacting their community and business partners to explain the 30for30 initiative, ask about needs and explore ways the company could lend a hand to each organization.

“This created a great foundation for how our company and team could be effective, and how we could establish a good mix of donated time, funding, products and materials,” says Weaver. “From there, we branched these communications out to our employees for their feedback and started to establish all 30 partnerships for the initiative.” 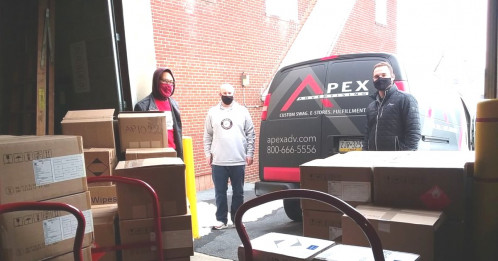 Apex opened up nominations to its staff and clients, and worked with The United Way of Lancaster to determine which organizations needed the most assistance. It assembled a roster that included larger nonprofits (like Girl Scouts of America and Salvation Army) and smaller ones (like Brodie’s Good Vibe Tribe and Aaron’s Acres) specializing in local services and causes. By year’s end, Apex had donated money, products, services or volunteer time to 26 different organizations, totaling 30 contributions in all.

That Apex managed to achieve its ambitious goal is no surprise. While many companies value social responsibility, Apex has baked it into its culture and mission. In 2017, the company committed to a new culture that prioritized, as Weaver says, “being humble, hungry and interpersonally smart.” It introduced volunteering PTO for all employees and began vetting manufacturers based on social responsibility practices. It identified minority-owned, women-owned and veteran-owned suppliers. It adopted a new focus on sustainability at its warehouse, with its freight partners, and in its products and services.

And, eventually, its president and CEO would brave the holiday rush to take three 6-year-olds shopping at the Target toy aisle. Talk about commitment.

“For Apex, our shift in culture, community and social responsibility is important because, at our core, it is who we are as a business, and it’s also a true reflection of our people,” says Weaver. “As a company, it is important to stay true to your values and seek the initiatives that not only align to the business but also relate directly to your employees. As we found out, the impact is priceless. It has created a true identity for our company, as these efforts are on full display to future employees, clients and business partners, showing what Apex is all about and what is important to us.”