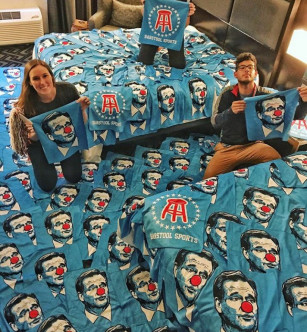 Patriots fans have ridiculed Roger Goodell through shirts, a billboard and now these towels. (Image via Twitter)

His being a native of New York might have qualified as a sufficient reason for fans of the New England Patriots to detest National Football League commissioner Roger Goodell, but when the overseer, through the United States Court of Appeals for the Second Circuit, gave quarterback Tom Brady a four-game suspension due to 2015’s Deflategate controversy, he secured eternal damnation among the Foxborough faithful. Last night, ahead of the reigning Super Bowl champions’ game against the Kansas City Chiefs, those backers offered the 11th-year officeholder a visual aid to prove their disapproval, with 70,000 towels depicting Goodell wearing a red clown nose.

Mocking the 58-year-old businessman has become old hat for the Massachusetts crowd (we are still waiting for actual hats to join the mix), so his scheduled appearance at Gillette Stadium compelled the powers that be at Barstool Sports to spend $140,000 for the newest thread-based harbingers of hate.

“This idea was really based on the ongoing story that Goodell was actually bothered by the shirt,” founder Dave Portnoy said of trying to get the goods on Goodell, whom he noted, all Patriots supporters “despise.” “It’s not like time has healed wounds.”

Clown noses already find themselves in the news through the release of the supernatural horror film “It,” so here’s hoping Goodell, based on his aforementioned dislike of the shirt and likely objection to last night’s antics, does not desire a trip to the movies, as he may never sleep again. With regards to the towels, their mass distribution let Portnoy and his pals rag on public enemy No. 1 on a much grander scale, as yesterday’s tilt against the Chiefs opened the league regular season slate.

The opportunity to taunt him with impunity had a bit of an “up-yours” feel to it, as the Patriots, whom many thought would struggle mightily minus Brady and would fail to make much of an impression upon his return, ended up capturing their fifth Lombardi Trophy. As has become customary, Goodell ventured to the league’s opening game and how poetic it must have felt to fans, many of whom handed out the towels a day ahead of the duel.

“It’s an obnoxious color, turquoise, so if we could get the majority of the stadium waving these towels, we thought it would be pretty cool, primarily because it will piss him off,” Portnoy said. “We are fairly comfortable in the fact that people really want to do it just so Goodell sees it. The hatred of Goodell is what is fueling all the volunteers and people who just want to make this happen.”

While the Patriots’ victory in Super Bowl LI secured their chance to have thousands of zealots laugh at his expense, Goodell’s appearance last night, albeit brief, might have proven a bad luck charm, as the Chiefs, long considered a strong contender in the American Football Conference, might have made real noses sniffle thanks to their 42-27 upset win. The Patriots head to New Orleans for Week 2 and will be back home for September 24’s matchup against the Houston Texans. If they enter the latter with an 0-2 mark, we bet Goodell could succumb to any secret desire to thumb his nose at their fan base.