NFL Commissioner Roger Goodell definitely will need to develop a thick skin to get through this Super Bowl victory. After the New England Patriots made the comeback of a lifetime to become champions, they clearly are not pulling any punches when it comes to their victory parade.

If you recall, Goodell punished the Patriots for the Deflategate saga, and it looks like the team has not forgotten. During the championship parade in Boston, Patriots quarterback Tom Brady wore a T-shirt that read, "Roger That," alongside a picture with five rings, according to the Boston Globe. It might be coincidental that the 2016 championship ring is on the middle finger, but we'll let you be the judge of that. 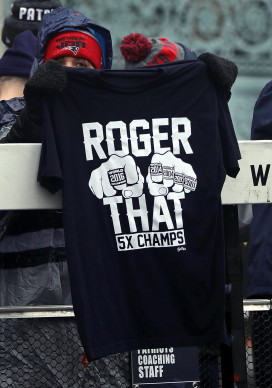 And Brady isn't the only one joining in on the Goodell mockery. Patriots defensive coordinator Matt Patricia wore a T-shirt that depicted Goodell as a clown.

#Patriots  DC Matt Patricia getting off the plane in a Roger Goodell clown shirt. pic.twitter.com/mN5c3N2pcP

They say the pen is mightier than the sword, but in our industry, we know that the spiteful T-shirt is the mightiest weapon of all.