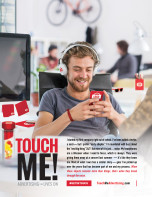 PPAI announced the launch of its #GetInTouch campaign.

Yesterday, we reported that Promotional Products Association International (PPAI), Irving, Texas, is launching its #GetInTouch campaign in September. The campaign, which will launch in conjunction with the Advertising Week event in New York City, will focus on the longevity and lasting effect of promotional products, and how advertising buyers can benefit from their uses.

To learn more about the campaign, we spoke with Tom Goos, board chairman of PPAI and president of Kirkland, Washington-based Image Source; and Paul Bellantone, president and CEO of PPAI.

Bellantone added that the numbers really speak for themselves, in terms of the usefulness of promotional products.

"Last year, [the industry] grew 3.8 percent," Bellantone said. "There are only two other advertising media that grew faster than us. Even though we're hundreds of years old as an industry, and even though people don't recognize us for all we are, more and more companies are using promo products to make long-lasting, impactful relationships with their customers. And that's happened in a time when digital is one of the fastest growing [types of] media. They're looking for some tangible product to put in the hands of their customers to create lasting relationships."

As Goos summed it up, promotional products are the tangible partner to drive with digital and the only advertising method that prompts a genuine thank-you.

"There's really no other advertising medium that triggers a thank-you," Goos said. "You go to the PPAI Expo, and you see our members clamoring over a pen! Go to any trade show and watch people react on how they get that product. And where does that product go? It goes home, it goes on their desks. It lives on, and then they remember the brand in a positive way. It's not the pop-up ad that stopped them from watching the video for 30 seconds. It actually had a positive impact on their life."

To achieve this goal of greater recognition within the industry, Bellantone and Goos said that they need as much participation as possible from industry professionals.

"PPAI and [Specialty Advertising Association of California] can only do so much," Goos said. "We really need the masses of our members involved. So the benchmark of success will be to kind of rally our troops. And most of our members are entrenched in their daily business, so trying to get them on board to deliver this message, that would really be a measurement of success."

"We'll only be successful if our members get engaged by [sharing] their case studies with us, so that we can then share them with marketers and advertisers," Bellantone added. "And it's what the association and its members are uniquely positioned to do."

Bellantone noted that, while PPAI has taken up campaigns like this in the past, he sees this being a large presence in the industry for years to come.

"It's not that we haven't done these things in the past," he said. "It's important because it has a lifespan of five years, and it's a partnership between PPAI and the industry. We've done a number of these things—we've had spokespeople, we've had collateral materials—but we've never packaged them together in one initiative that had a long-term impact. This may very well last longer than my career with PPAI, beyond individual spot initiatives in any given year."