Buh bye, Vegas! All week long, Promo Marketing was reporting live from the PPAI Expo 2019 at the Mandalay Bay Convention Center. If you were at the show, we hope you had a great time and learned a lot. If you weren't there, we made sure to include product information, session wrap-ups and a whole lot more in our newsletter. Up now: recapping Paul Kiewiet's education session on promotional products sales, "Big Game Hunting."

On Wednesday, Jan. 16, promo industry consultant Paul Kiewiet, MAS+, shared his experiences in landing big accounts like Kellogg’s, and gave distributors advice on the steps they should take to make their business dreams a reality.

His presentation started with a choice: You could spend your career with a lot of small accounts and do OK, or you could aim high for a few big customers. It’s the small fish versus big fish question (although his metaphor of choice was hunting bigger game). 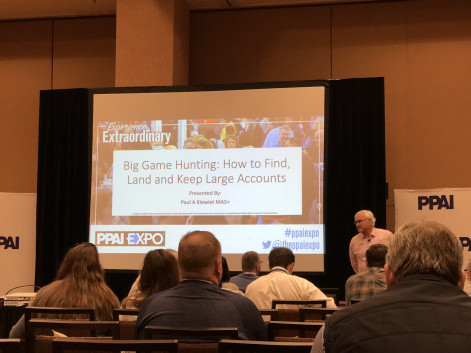 Unsurprisingly, he said a lot of it has to do with the distributor’s mindset.

It touches on the concept of the Law of Attraction, where a person can sort of will something into existence by imagining that it will happen and visualizing it. Kiewiet didn’t use this terminology specifically, but his advice about having something on your list is the same general idea. If you convince yourself that something will happen, with the right amount of effort, it will.

He also suggested telling people in your personal life, as well as your colleagues, about your plans. This adds accountability to your pursuit.

“If you can have the courage to talk to your employees and everyone in your organization, and maybe even the suppliers and say, ‘I’m going to get the Disney account,’ it starts getting real,” he said.

For Kiewiet, persistence was is also key. Sticking with the hunting metaphor, “Moby Dick” would be a lot less interesting if Ahab managed to kill the whale on the first try, right? Distributors shouldn’t be discouraged if it doesn’t work the first time.

“It took me 19 years to get the Kellogg's account,” Kiewiet said. “That was because I was committed to it.”

It’s one thing to say you’re committed, but another thing entirely to actually pursue it with well-planned steps. For Kiewiet, this means researching your prospect. He attended food trade shows for years and read industry publications so he had a vast knowledge of what exactly companies like Kellogg's wanted.

What shouldn’t be a surprise to anyone is that Kiewiet’s core advice doesn’t differ much from other sales advice you’d hear: Be a solutions provider, listen to your clients and find a way to be different than your competition.