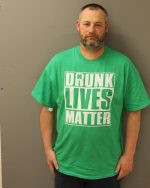 Come his May 26 preliminary hearing, Elwood Gutshall III will have had more than two months to think about his moral and fashion faux pas. The Pennsylvania inhabitant will occupy a courtroom following his arrest for drunk driving, an offense that he confounded, from an apparel point of view, by wearing a “Drunk Lives Matter” T-shirt.

The controversial garment has proven a headache for Amazon since the retailer started to peddle it as a satirical St. Patrick’s Day item. Drawing inspiration from the Black Lives Matter social justice movement, the T-shirt has met with praise as a novelty purchase among many product reviewers, but it has also gotten the Irish up of those who feel its very existence epitomizes poor judgment. As for Gutshall, his rocky reasoning became apparent March 19 when, officials contend, his green Ford pickup truck committed multiple traffic violations in Newville, not far from his Newburg home.

“After subsequent investigation, it was determined the driver was under the influence of alcohol beyond what he could safely operate a motor vehicle,” a department release revealed.

Authorities detained the 44-year-old, whose .217 blood-alcohol content far exceeded the commonwealth’s .08 legal limit, and captured his image for posterity—and, going by Facebook comments, relentless ridicule. Gutshall’s arrest, news of which the department posted on social media April 4 and which the Associated Press circulated three days later, yet again highlights not only the perils of drunk driving, regardless of his escaping physically unscathed, and gives his shirt’s detractors golden opportunities to question Amazon’s promotional responsibility and level of maturity. Though, as the saying goes, they can’t fight City Hall, they will probably be able to take some solace in knowing that Gutshall likely will have legal guilt join his clothing’s condemnation in six weeks' time.