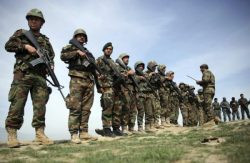 The Pentagon is in trouble this week for news it wasted as much as $28 million over 10 years buying woodland camouflage uniforms for the Afghan army, according to USA Today.

The Afghan Defense Minister picked the pricey forest color pattern over free camouflage pattern options owned by the U.S. government according to a 17-page report. The report pointed out that forests only cover 2.1 percent of Afghanistan's total land area, making the uniform pattern choice an illogical one.

“My concern is what if the minister of defense liked purple, or liked pink?” John Sopko, the special inspector general, told USA Today in an interview. “Are we going to buy pink uniforms for soldiers and not ask questions? That’s insane. This is just simply stupid on its face. We wasted $28 million of taxpayers’ money in the name of fashion, because the defense minister thought that that pattern was pretty. So if he thought pink or chartreuse was it, would we have done that?”

It looks like this isn't the first time Sopko's office has chastised the Pentagon for frivolous spending over the years, but this uniform issue looks to be the final straw. Not only did the Pentagon spend money on this special pattern, but tailoring, including using zippers instead of buttons, made the uniforms even more costly.

According to USA Today, switching to a U.S.-owned camouflage pattern could save U.S. taxpayers as much as $71 million over the next decade. In response to the report, the Pentagon acknowledged the need for a cost-benefit analysis to look for "a more effective alternative."

With this news hitting the public, many government representatives are up in arms.

“You’d think the Pentagon would have had a good handle on how to pick the right camouflage for uniforms,” Sen. Chuck Grassley, the Iowa Republican and senior member of the Budget and Finance committees, said in a statement, according to USA Today. “Instead, the Defense Department gave up control of the purchase and spent an extra $28 million on the wrong pattern just because someone in Afghanistan liked it. It’s embarrassing and an affront to U.S. taxpayers. Those who wasted money on the wrong camouflage uniforms seem to have lost sight of their common sense.”