Those Pokémon card Happy Meal toys are selling for hundreds of dollars on eBay. One card sold for $500, apparently. But, people aren't just selling the packs and cards themselves.

Somehow they're getting their hands on entire sealed boxes intended for McDonald's. 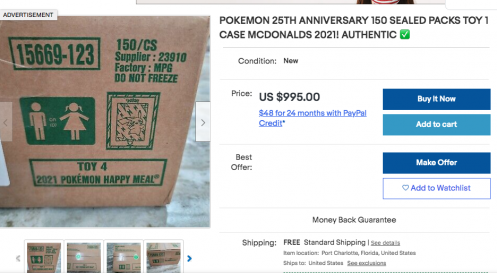 There’s also an in-store display featuring the cards and other printed POS advertising, listed for $399.

One box, complete with McDonald’s branding and the message “Pokemon Happy Meal 2021 Customer Satisfaction Case No Upcharge,” which reportedly contains 152 packs, is up to $430 with 8 hours left in the auction at time of publication.

Another listing for a box of 118 packs has five days left on the auction, and is already at $505. 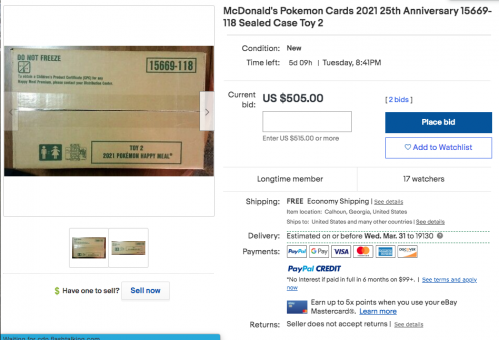 So, yeah, people did everything in their power to get every Pokémon card they could, swooping in and buying Happy Meals in bulk or trying to bribe an employee into giving them the toy without any food. But, somehow, people also managed to get their hands on sealed boxes before McDonald's locations had a chance to distribute the contents.

None of the product descriptions go into how the sellers acquired the boxes.

We can only imagine it involved multiple Honda 2000s with under-glow, like the DVD player heist at the beginning of “The Fast and the Furious.”