Thanks to a 1789 letter from Benjamin Franklin to French physician Jean-Baptiste Le Roy, death and taxes have claimed ignoble status as life’s lone guarantees. This year, though, Disney has decided to have that duo welcome a far more positive third element as a surety, namely, undying devotion to its parks’ cinematic promotional products. The company’s latest good intention to honor fans' allegiance (and prompt online bidding battles) comes in the form of one of is most crooked characters, Oogie Boogie, “The Nightmare Before Christmas” antagonist whose buggy body has inspired a popcorn bucket that is enjoying seasonal must-have distinction. 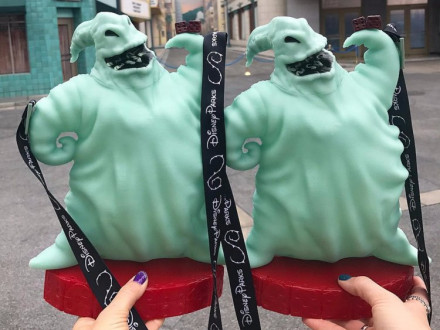 The Oogie Boogie popcorn bucket has given Disney another marketing success. (Image via Twitter)

To many Disney-heads, the $15 item has won merit as a priceless possession, as they have endured waits lasting up to an hour for it. Their patience offers insight into the popularity of the movie, which earned $75 million in domestic receipts upon its 1993 release, as well as their admiration for rewarding Disney for its sentiment. After all, they can view the Tim Burton classic at any time and root for the villain’s downfall, but swarming to secure the Oogie Boogie goodie at Disneyland and Disney California Adventure parks and through the Walt Disney World-situated Mickey’s Not So Scary Halloween Party proves a higher level of commitment, especially, when, as one source said, the product does not look as if it contains much popcorn.

The contents are definitely secondary in this instance, which was not the case earlier this year when Disney peddled a cup-enclosed enchanted rose in the spring as a nod to the film update of “Beauty and the Beast.” The Oogie Boogie keepsake has no such cinematic tie-in, but it does not lack a link to how Disney is marking the Halloween season, as anyone familiar with the movie and the pair of video games that it spawned, including 2005’s “Oogie’s Revenge,” can attest to. The plot finds the Halloween Town bad guy (or bad burlap sack, if you will) attempting to compromise his domain and Christmas Town by involving protagonist Jack Skellington and Santa Claus in a dangerous game, thus fusing two realms and celebratory events.

Companies often take gambles with their promotional materials, but Disney again has beaten the odds through the Oogie Boogie commemorative, which honors the character’s own penchant for high-stakes ventures by placing dice atop his left hand (like another chronicler of the merchandise matter, I appreciated the sum of the rolls), and figures to prove throughout the march to Halloween that it can be good to be bad. The entertainment icon is also using the antagonist as a featured component of the Haunted Mansion gingerbread house at Disneyland Park, ending his 13-year absence from the ballroom. For those who, like the patient purchasers of the popcorn bucket, are not spooked out over the prospect of waiting a long time to have a bit of bliss, there is good news, as the latter opportunity will last through early next year.

Submit Your Nomination for Print+Promo Marketing's 2021 Women in Print and Promo Issue!