It's strange to say an eating lifestyle choice is trending right now, but thanks to Beyonce's Coachella announcement about going back to eating vegan, we can definitely say plant-based is in for 2018. Perhaps Topshop wanted to take advantage of the diet's growing popularity, but they probably should have double-checked vegan requirements before unveiling their new T-shirt. 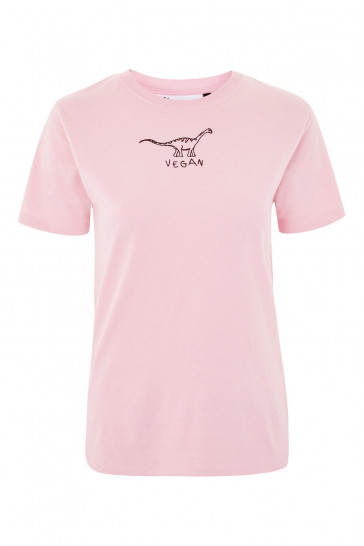 The $40 "Vegan Dino" T-shirt is a fashion-forward, millennial pink tee with a major problem: the label. The main star of the T-shirt is the Vegan Dino, an herbivorous dinosaur, but the label features a cake recipe that is anything but vegan, thanks to the butter and eggs.

It's an innocent mistake. The original retailer of the T-shirt, Tee and Cake, puts the recipe on all of its garments, so the label probably wasn't even considered when it came to this new T-shirt design. But obviously, it's contradictory to peddle a pro-vegan T-shirt with a dairy-filled cake recipe.

Of course the internet responded how it usually does: a good ol' fashioned roast.

Sooo 🤦‍♀️🤦‍♀️
1)’seriously?’ A tee that advertises veganism but then come with a cake recipe that is far from vegan... missed opportunity there
2) a possible jibe at vegans?? If so shame on you @TeeAndCakeUK and do you really want to promote that negativity @Topshop ?! pic.twitter.com/RUHLTJF1bY

In a statement to The Sun, Topshop explained the oversight.

Point taken, Topshop, but you've got to be a little more careful in the age of the internet. Plus, you'd be angry, too, if you had to give up pizza.