When Matt Furie created Pepe the Frog back in 2006, it’s safe to say that he never intended for his relaxed, amphibian stoner of a creation to become an icon for the alt-right movement. Pepe was merely meant to be a peaceful cartoon character, living with a group of animal friends, gracing fans with the chillest of catchphrases: “Feels good man.”

However, since we live in a world where nothing is allowed to remain sweet for long, and in which joy is often misconstrued as an invitation to provoke hate, Pepe has been co-opted by the alt-right movement and branded a hate symbol by the Anti-Defamation League.

While Furie has been fighting to regain control of his character’s likeness and meaning for years, even resorting to killing Pepe off in a 2017 comic, he has been thwarted time and time again by folks on the alt-right side of life.

Now, however, it seems that Furie may actually have a chance to wrest Pepe away from his captors. The artist is suing InfoWars, the rightwing conspiracy outlet founded by Alex Jones, for selling a stylized poster featuring Pepe on its website. 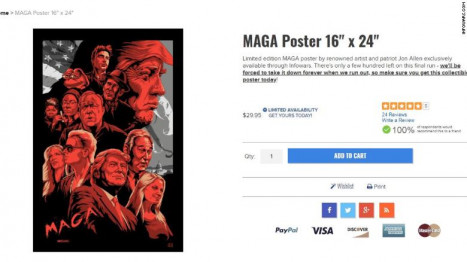 Screenshot of the poster from InfoWars' website; Credit: CNN

The poster, created by an artist named Jon Allen, represents Pepe with a number of alt-right icons, such as Ann Coulter, Alex Jones, Milo Yiannapoulos and Roger Stone, alongside Donald Trump in a style which calls to mind movie posters created for the Star Wars series.

The lawsuit states that "Furie did not authorize the use of the Pepe image or character in this poster, and does not approve of the association of Pepe with Alex Jones or any of the other figures shown in this poster, or the 'MAGA' slogan."

The lawsuit is seeking unspecified damages, as well as a permanent injunction against further copyright infringements involving the use of Pepe without the express permission of the artist himself. If Furie is able to prove that InfoWars committed copyright infringement through its sale of the posters, it could be a formative step for the artist toward taking back control of his creation.