In his famous poem “Alumnus Football,” Grantland Rice declared, “For when the One Great Scorer comes to mark against your name, he writes–not that you won or lost–but how you played the game.” The renowned sportswriter died in 1954, so he never experienced the victory-obsessed mindset that so often characterizes National Football League fans. Those devotees will derive more than secondary joy each time their favorite franchises emerge as winners this year, as PepsiCo and Bud Light are using Snapcodes to endow them with prizes and opportunities to score coveted tickets, including ones to Super Bowl LII.

The league’s regular season slate begins Sept. 7, with the New England Patriots hosting the Kansas City Chiefs in tantalizing AFC action, and as the campaign unfolds, their supporters and other squads’ backers will be rooting for clutch plays and defining triumphs not only because they will yield playoff berths. Relying on the immense popularity of Snapchat, the aforementioned companies will use codes from the image message/multimedia mobile applications to make the contests even more compelling. 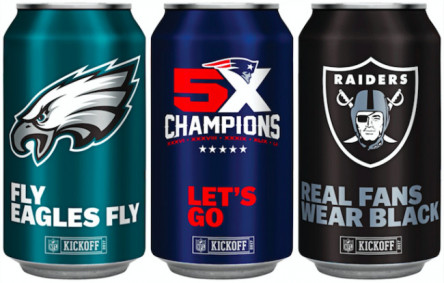 Bud Light is looking to make NFL fans even more excited about their clubs by adding catchphrases and rallying cries to cans and bottles. (Image via brobible.com)

PepsiCo, whose holdings include giants such as Frito-Lay, Gatorade and, of course, Pepsi-Cola, is placing Snapcodes on specially marked snacks and drinks through Oct. 7, which is just ahead of Week 5 tilts, and will resume the promotion come the postseason. Consumers who select the designated goodies will receive a team to root for that week after snapping the markers, and if that unit’s performers walk off the field with a “W” to complement their aches and pains, the end-users will also be victorious through a variety of prizes.

Upon reading of the random assignment of clubs, I chuckled over the prospect of having fans of the Philadelphia Eagles pull for the Dallas Cowboys or the passionate fan base of the Pittsburgh Steelers cheer for the Cleveland Browns. (Good luck there, Steel City inhabitants!) Hoping for normal adversaries to be gridiron greats will matter little to lucky participants who will score season or Super Bowl tickets and other experiences.

“The rise of off-the-field games have taken the NFL viewing experience to the next level and gamified it,” Christina Clarke, senior director of marketing for Frito-Lay, said. “But snacking is also a huge part of the viewing experience, so we wanted to join the two and offer an engaging gamified digital program.”

Her employer’s Tostitos brand recently relied on Snapcodes, too, to tout team rituals and lucky charms through limited-edition packaging. Marketing Dive plays prognosticator regarding the promotion’s possible success by referring to a prominent Gatorade “dunk” filter that PepsiCo used for Super Bowl 50, with its 165 million impressions a measuring stick for the new program.

The site also credits Snapcodes for rejuvenating the popularity of QR codes, so, of course, given its affiliation with the league, Bud Light is giving fans a double shot at spiking their enthusiasm. The entity is also offering chances for them to win tickets to the U.S. Bank Stadium-situated matchup between the league’s best, with the codes also unlocking an interactive Bud Bowl-like game and team-specific filters.

In conjunction with that novelty, the beverage behemoth will also continue to theme cans with the league constituents’ logos and will place the indicators in aluminum bottles, too. Looking to highlight fans’ allegiance even more, Bud Light is placing catchphrases and other expressions on the holders to pay tribute to each team’s identity. Some will be well-known, with our city’s “Fly Eagles Fly,” Atlanta’s “Rise Up” and Cincinnati’s “Who Dey” among them, and others will certainly inspire appreciation for their creativity, like Pittsburgh’s “Got Six?” in honor of its half-dozen Lombardi trophies and Tennessee’s “Titan Up,” a fine example of wordplay.

We are 20 days away from the first official snap of the 2017 season, but Snapcodes users are likely already in midseason form. Here’s to fortunate purchases, everyone!