PETA is releasing a line of Iditarod merchandise spoofing the race's 50th anniversary and drawing attention to its controversial animal-welfare track record.

Never one to rely on subtlety, the PETA line features a depiction of a bloody sled dog with the caption "Iditarod: 50 years of racing dogs to their death." The line includes coffee mugs, patches, pins, key chains and stickers. There's also a T-shirt and mask with the slogan "End the cruel Iditarod." 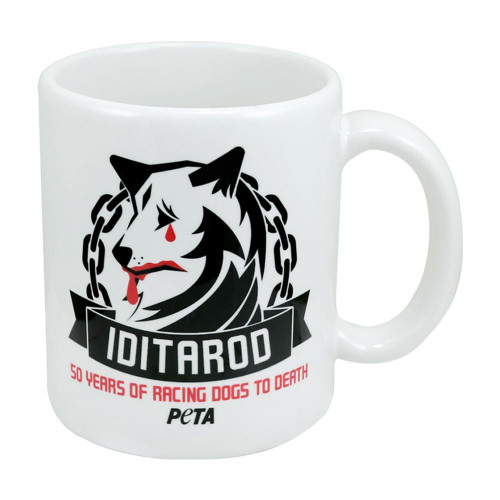 “Fifty years of forcing dogs to run until their bodies break down and they drop dead is 50 years too many,” PETA executive vice president Tracy Reiman said in a press release. “PETA’s ‘bloody’ Iditarod apparel honestly represents a race that has killed over 150 dogs and counting.”

PETA has taken strong stances against using animals for entertainment purposes at the expense of their health. The organization's campaign against the Iditarod has successfully resulted in companies as big as Alaska Airlines, ExxonMobil, Coca-Cola, Jack Daniel's and Chrysler pulling their sponsorships of the race.

In-your-face designs like this certainly grab attention, and could recruit more people for PETA's cause against the dog race while raising funds for the organization. It's also not the first time we've seen PETA lean on shock value specifically for merchandise. In 2019, it released a holiday sweater featuring a "bloody" lamb plush attached to the front and back.