Petty Criminal Behind 'Hollyweed' Sign Cashes In with Apparel

Remember when someone put some fabric on the Hollywood sign to make it say "Hollyweed" on New Year's Day? That guy, Zach Fernandez, who calls himself "Jesushands" on the internet, is raking in some serious cash from "Hollyweed" merchandise.

The New York Daily News reported that Hernandez launched an online merchandise shop on Sunday and earned about $68,000 in less than a day. 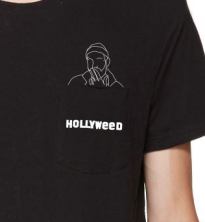 While that's an impressive number, the price certainly helped that number grow a bit. A simple "Hollyweed" sweatshirt will run you $150. A T-shirt will cost you $100. He's also auctioning signed and numbered photos of the sign, which cost $1,000 each.

Hernandez apparently left L.A. shortly after his prank, and is laying low for fear of criminal charges. But, TMZ is reporting that the LAPD isn't exactly listing him as public enemy No. 1. He's currently only wanted for trespassing charges.

Heck, I bet the sale of one T-shirt, maybe two, would be enough to cover his fines.