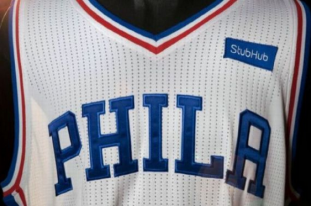 According to ESPN, the Philadelphia 76ers have become the first team to sell an ad on an NBA jersey. And the first sale didn’t take long, considering the NBA just approved the on-jersey advertisement plan last month.

Beginning in the 2017-2018 season, the 76ers’ jerseys will feature a 2.5x2.5” logo patch of the ticket-selling company. Sources say the team has sold all three seasons within the three-year pilot program at $5 million a year, with an extension option should the advertisement plan continue, ESPN reported.

All parties seem pleased with the deal.

"We are about being first, being different, being innovative and getting to market at quickly as we can," Scott O’Neil, CEO of the team, said. "We're thrilled that the NBA has decided to be an innovator among the major sports leagues in this country, we're happy that we will be the beneficiaries, and we know that being first here will drive value for our partner."

"This is strategic beachhead property for us," Scott Cutler, CEO of StubHub, said. "We, as a company, have been very transaction-oriented. We want to be more a part of the emotional experience fans have with their teams, and we think a deal like this gets us closer."

In fact, the parties are so excited that, while jerseys sold nationwide won’t have the corporate sponsor logos on them, the 76ers will sell jerseys with the StubHub logo on them at their team locations.