Anyone with even the slightest knowledge of Philadelphia sports knows that fans here love letting athletes know when they have disappointed the masses. While said performers most often hear boobirds’ gripes at the stadium, some disappointed supporters use other means to take offense. Following a Philadelphia Eagles loss to the Detroit Lions, diehard fan Hakim Laws—fresh off saving children from a house fire—called out Eagles wide receiver Nelson Agholor in a local news interview. His comments quickly went viral, with Laws creating T-shirts and sweatshirts commemorating the micro-moment. 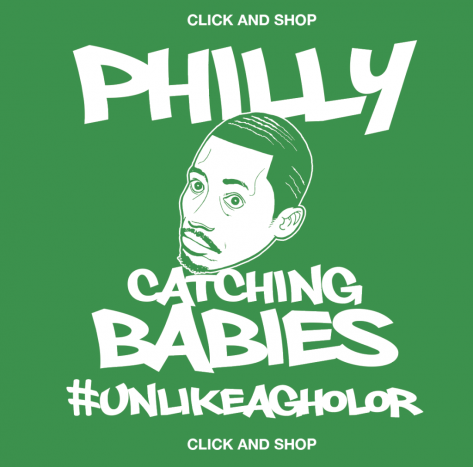 Hakim Laws is helping a Philadelphia family in need by giving them a portion of the proceeds from T-shirts and hoodies bearing the #UNLIKEAGHOLOR hashtag. | Credit: Unlike Agholor Philly

The 26-year-old Agholor has slowly become an offensive threat for the Super Bowl LII champs, but that does not mean he has become immune to gaffes. Already the subject of ire for a crucial dropped pass the week before, he earned Laws' ridicule for a subpar performance against the Lions, with the 27-24 setback dropping the Eagles to 1-2, a mark they leveled on Thursday by beating the Green Bay Packers, 34-27.

Ahead of the most recent game, though, tensions were high, and when Laws appeared on television after having helped to save children from a fire in Philly, he told everyone that, “My man just started throwing babies out the window. We was catching them, unlike Agholor and his mishaps. I’d like to put that out there.” An immediate laugh inducer, his comment is now aspiring a bit of merchandise glory, with a fine display of altruism, too.

Does anyone in the Philly area know this man, Hakim Laws? His heroic actions saved numerous lives, plus his commentary is gold! Would love to have him on my show. If you know him, please have him contact my producer @MissRobinAustin - Thank you! https://t.co/7cGZRRidoF

Featuring Laws’ image, six T-shirts and sweatshirts, three in green and three in white, proclaim “Philly Catching Babies,” with #UnlikeAgholor finishing off the design and serving as a supreme roast of the wideout. Priced at $30 and $46, the items are comedic, certainly, but one might wonder if they are the sort of thing that someone would want to don that often, considering that Agholor, drops or not, is an important piece of the Eagles' offense. For his part, though, Laws deserves kudos, as he will donate  partial proceeds from the garments’ sales to the local family whose home suffered damage in the blaze.

Another interesting element to this micro-moment comes from the reaction of Agholor, who, instead of taking offense to the swipe at his less-than-perfect effort, invited Laws to see the Eagles take on the New York Jets Sunday at Lincoln Financial Field. According to an account on that news, the vocal fan does not plan to temper his reactions no matter the generosity shown to him. We wonder, then, if his anything-goes mentality will see him donning a Catching Babies shirt come five days from now.