Philadelphia's Premier League Event Was a Masterclass In Promotional Merchandise

Soccer fans in America are used to getting up early. Some European games are televised at 7 a.m. on the East Coast. That says nothing about devoted West Coast fans who wake up in the middle of the night just to support their favorite teams.

I'm one of those people who doesn't mind waking up early to watch soccer. I love it, in fact. So, when the USA Premier League broadcast had its Fan Fest outside of Philadelphia City Hall, I was OK with biking down there at 5 a.m. to get a good spot and watch the show.

Others might not have been so eager, and that's where some good souvenirs and branded merchandise can sweeten the deal a little.

And there was plenty on display throughout Dillworth Park.

First and foremost, the entire side of Philadelphia's most famous building was decorated with a giant banner for the event. Surrounding the park, there were signs with the Premier League logo, the USA network logo, and all kinds of other "Premier League Fan Fest" imagery, so even the people who couldn't make it in knew exactly what everyone was cheering about on the other side of the fence. 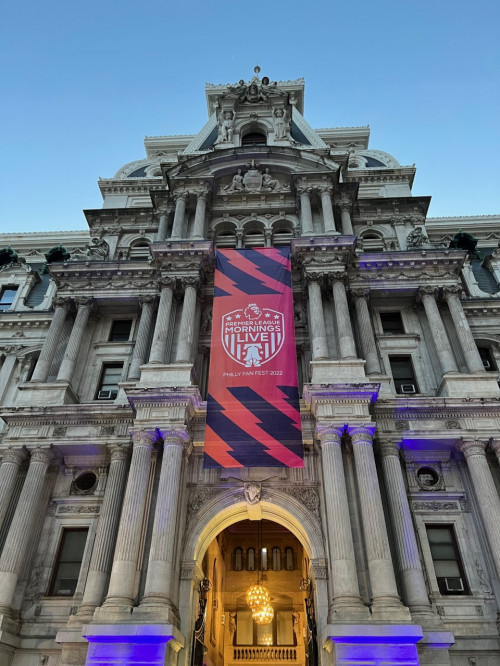 Having been in this business for as long as I have, I started noticing the abundance of branded merchandise as much as I was actually paying attention to all of the games being televised on giant screens.

There was a booth sponsored by Barclays (the sponsor of the Premier League) where you could play a giant claw machine. The prizes were in clear plastic balls, containing smaller souvenir soccer balls with the Barclays logo, $500 gift cards, and one containing a blue ball that represented an all-expense paid trip to London.

I didn't win the trip, but I did get a consolation prize: a cool branded T-shirt with a large imprint on the back and smaller one on the front. I later got that shirt signed by the broadcast team and Premier League all-time scorer Alan Shearer. So, needless to say, I will not be throwing it away any time soon. 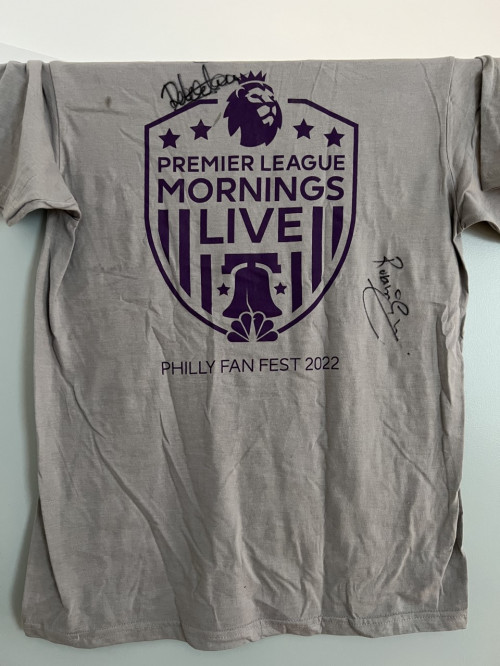 Elsewhere, Budweiser was doing a pretty clever incentive campaign where you could receive a special co-branded can cooler with the Premier League logo and Budweiser logo if you bought a Bud beer. (Or, you might not be in the mood for a beer at 8 a.m., so you make a friend in the claw machine line who loans you his beer to get a can cooler for yourself.)

There were examples of live personalization, too. Fans with team jerseys without a player's name on the back could bring it to a booth to have their favorite player's name and number printed on their jersey for free.

Even aside from the plentiful merchandise for sale and for grabs, the show was just as much about promotional products as it was about soccer. What do you think all of those scarves and flags held up in the crowd are? And look at all of those hats and T-shirts!

The Gunners and @ArsenalPhilly are out in full force 💪 pic.twitter.com/L1mhLqmoll

Heck, the trophy itself (which made an appearance) is a promotional product, complete with ribbons representing the current champion's color scheme.

As the day went, even though it was my Saturday and I wasn't on the clock, I couldn't help but think about all of the ways this event was really held up by promotional products. Think about it: People got in line at around 2 a.m. apparently. Others were more sane and at least slept until about 4:30. But even with that, people would feel pretty disappointed if they showed up for this at the crack of dawn and had no souvenirs to show for it.

It was an incredible time, whether you were a soccer fan or not, and that spectacle was, in reality, largely due to the promotional products available throughout the event.