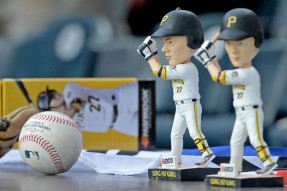 The Pittsburgh Pirates went through with a promotion featuring Jung Ho Kang, the subject of a sexual assault investigation, but offered fans an alternative promotion. (Image via Pittsburgh Post-Gazette)

Last week, the Boston Red Sox pulled the plug on a bobblehead giveaway five hours before the game, after the team felt the depiction of designated hitter David Ortiz was "racially insensitive." Now, there's another controversy in the world of bobbleheads. The Pittsburgh Pirates were set to give away bobbleheads of infielder Jung Ho Kang Thursday. But, Chicago police currently are investigating sexual assault allegations against Kang.

The day before the game, Pirates spokesman Brian Warecki told the Pittsburgh Post-Gazette that the team takes the allegation "very seriously," but decided to proceed with the promotion as the police haven't filed any charges against Kang.

Kang allegedly gave a 23-year-old woman in Chicago an alcoholic drink that caused her to lose consciousness and sexually assaulted her in his hotel room while the Pirates were in town for a game, Chicago police told the Pittsburgh Post-Gazette.

Kristen Houser, a spokeswoman for the Pennsylvania Coalition Against Rape, said that the organization understands the Pirates' stance on the promotion, but she hoped some fans might choose not to accept them.

"Ultimately, we see this as an important opportunity to get information out and getting people involved in prevention of sexual assault," she told the Pittsburgh Post-Gazette. "But the fans are going to do what the fans want to do."

Some fans did voice their concern over the allegations with Kang—who, under league rules, cannot receive disciplinary action until the investigation is concluded—and the Pirates came up with a solution: an alternative giveaway.

Fans who felt uncomfortable with the Kang bobblehead could request a voucher that entitled them to another item.

The team further asserted that it has clearly demonstrated its stance in opposition to violence against women over the years, and that it takes the allegations very seriously. However, since Chicago police have not charged Kang, he is still an active member on the roster.