Certain words have a notable knack for producing smiles, with “vacation,” “sleep,” “free” and “raise” being among the finest friends to faces. Fewer examples, though, can engender such anticipation and subsequent satisfaction as “pizza,” which has attained global adulation that not many foods can counter. Serving and delivering more pies than any of its worldwide industry peers, Pizza Hut has been championing cheese since 1958 and is proving its upper crust identity yet again though holiday starter packages that consumers can acquire by professing love for its titular item via Twitter. 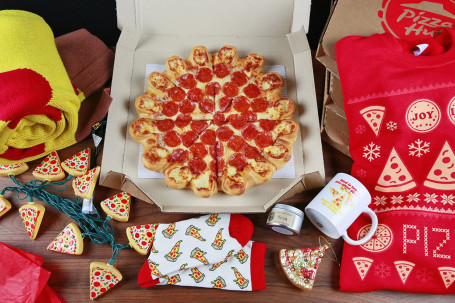 Pizza Hut is spreading holiday cheer through a new pie and a merchandise line. (Image via Twitter)

The holiday season can certainly be a tense time due to increased work responsibilities, travel difficulties and less-than-cordial exchanges with family members, but the new offering will do its best to keep anyone from feeling saucy thanks to 16 pockets teeming with a five-cheese blend. (Whoever came up with that concept definitely deserves a “raise.” Are you smiling yet?) The novel creation will help end-users bring glad tidings to those with whom they share the product, with Pizza Hut’s president of brand marketing and consumer insights, Zipporah Allen, dubbing it “the perfect addition to upcoming holiday festivities.”

We all know the fourth quarter compels businesses to make sure their thinking caps are snugly in place, and the gooey goodie will likely prove the powers that be are marketing geniuses yet again, but beyond simply giving consumers a captivating means to up their calcium intake, the company’s overseers are rewarding them through social media. With 1.58 million followers, Pizza Hut has obviously succeeded in securing ample regard on Twitter, and it is acknowledging the sway that emojis, handles and hashtags enjoy through the starter packages. Tweeting the pizza slice and gift emojis, using #TisTheCheesen and giving @PizzaHut a shoutout qualify devotees for a chance to receive pizza-specific rewards, with sweaters, beanies and string lights among the reasons to be, as a press release from Yum Brands, Inc. punned, “grate”-ful for the various pies that Pizza Hut hawks at more than 16,000 global spots.

Owing to its longevity, the company has definitely crafted campaigns that have resonated with end-users. While food purveyors are seeking that bit of added momentum to round out the year, Pizza Hut could look extra sharp in distancing itself from the pack, especially its competitors, due to this promotion. In other words, it is positioning itself well to get a sizeable slice of the action that comes with spreading holiday cheer.