Is This Planned Parenthood Tote Bag the Coolest Ever? 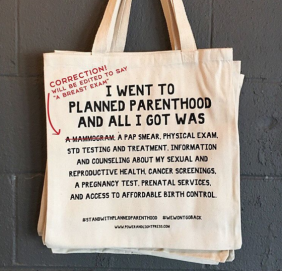 With Planned Parenthood at risk for losing funding, the nonprofit is looking for other ways to generate cash flow. Thankfully for the organization, Power and Light Press stepped in to help. The company released a tote bag featuring a list of the many services Planned Parenthood offers, and the bags are selling for $15. The bags quickly went viral, and have raised $20,000, which was donated in full to Planned Parenthood.

The bag's design itself plays off the well-known phrase, "I went to [place], and all I got was this lousy T-shirt." But instead, the Planned Parenthood tote bag reverses the sentiment to suggest the plethora of health offerings available to its visitors is invaluable.

End-users also are impressed about the manufacturing backstory of the tote bags. They are made in an all-woman owned screen-printing shop in Portland, Ore.

What do you think of the tote bag?