Most Plastic Bottles Aren't Recycled as We Might Think 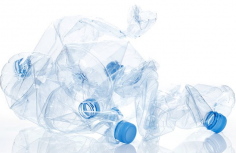 A small percentage of major soft drink companies' bottles are made from recycled material. (Image via Twitter)

At least, it is in theory. But, in reality, only a small fraction of the plastic we recycle from our bottles go into future plastic bottle manufacturing.

Instead of returning to the market as new bottles, most plastic bottles are used to make synthetic fabrics for clothing. As we've seen, companies like Adidas have been using plastic waste for apparel and footwear.

CNBC noted that the athleisure boom has especially been good for recycled plastic.

Demand has been helped along by the athleisure boom—as well as carpeting, bags, packaging, and straps for shipping boxes.

That means nearly every drink we buy is packaged in new plastic, a trend aided by the recent drop in oil prices—plastic is made from petroleum—making new plastic cheaper than recycled material. Environmentalists worry that for beverage companies, future growth relies on producing more disposable bottles that, in the current system, only feeds a growing volume of plastic junk across the world.

Many of the plastic products that we toss in the recycling bin still end up in landfills, but some companies are working to change that.

"Fifty years from now, when I am not around, people will be digging landfills and thinking we were crazy people," Farahnik told CNBC. "How could we create landfills rather than recycle?"

It does make sense to turn plastic bottles into other plastic materials, like polyester for apparel. Converting plastic into fibers for apparel requires less energy and labor than converting it into food-grade drinkware.

Still, the number of plastic drinkware products that aren't actually recycled is disheartening.

"You think if you recycle a bottle you've absolved yourself of responsibility," Gail Baugh, a former teacher of textiles and fashion merchandising at San Francisco State University, told CNBC. "But it's simply not true."