How a Plush Tiger Made Winter Olympics Merchandise a Smash Hit 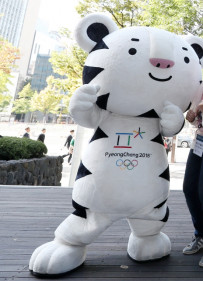 The 2018 Winter Olympic Games came to an end yesterday in Pyeongchang, South Korea after nearly three weeks of highlights and headlines. There were crashes, dramatic finishes, hot takes, doping scandals and political statements—pretty much everything the media could ask for from a sporting event. From a marketing standpoint, however, there was one indisputable star of the show: Soohorang, the cartoon white tiger that served as the event’s official mascot.

Soohorang first came to our attention when victorious athletes were shown on TV and in photos online posing with a plush stuffed toy in the mascot’s likeness. While some folks were surprised to see athletes being presented with a toy rather than medals, the absence of the awards was no surprise to those familiar with the Winter Olympics. Unlike the Summer Olympics, during which athletes are presented with medals directly after their events, the Winter Games traditionally hold a nightly medal ceremony to award athletes who were victorious during the day.

While some viewers may not have found the sentiment worthy of athletes who have reached the pinnacle of their sport on the international stage, the success of Soohorang as a marketing tool is impossible to frown at. At the time of our last report, the plush doll was being sold on Amazon for $57, and was backordered until March (the price is down to $46 now, and it looks like normal shipping has resumed).

Soohorang’s popularity is now being hailed as a major factor in the overwhelming success of the Games’ merchandising operation. Officials in Pyeongchang are reporting that the two primary stores in Gangneung Olympic Park and Pyeongchang Olympic Plaza were each averaging 15,000 to 20,000 visitors per day. This means that over half a million people visited the stores over the 17-day run of the 2018 Winter Olympics. This success is due in no small part to Soohorang, whose likeness graces a wide range of merchandise. In addition to the plush toy, Soohorang can be found on a sweatshirt, a hat and a fleece shawl, among other branded products.

So, is it safe to say that Soohorang is the undisputed champion of the 2018 Winter Olympics? As far as marketing is concerned, the answer is definitely “yes.” The adorable cartoon tiger has proven itself to be a powerful pusher of merchandise, and as the face of the Games, a universally adored mascot. For any skeptics, if the numbers aren’t enough to convince you, then just look at that face. That ought to melt the heart of even the most seasoned of pessimists.

Soohorang’s success can be attributed to a number of factors. The cuteness certainly played a role, as did the ubiquity of the mascot’s likeness on a number of branded products. There’s also the cultural significance factor, which was tapped into by the white tiger’s symbolic meaning as a guardian animal on the Korean Peninsula, offering protection and guidance to athletes and spectators alike. Lastly, by playing into Olympic tradition, organizers struck gold with the decision to hand plush toys to athletes after they achieved victory in their events. This created plenty of attention for Soohorang, whose visibility online and on TV contributed to increased merchandise sales and a number of articles focusing on the Games’ adorable mascot.

As it turns out, people enjoy the sight of a cartoon white tiger much more than they do a round piece of metal. For the marketers behind the 2018 Winter Olympics, the success of Soohorang has been more than proof of this.

Related story: The Best And Worst Gear From The 2018 Winter Olympics

Our 5 Favorite Promotional Products of the Week: Earth Day Apparel, Lanyards for Cats and More
Comments
The Top Lists