Even if you didn’t grow up in the '90s, you’re likely familiar with Pokémon. From playing cards, to comics, video games, cartoons, movies and beyond, the little monsters have been a pop culture staple for decades. As for myself, I was never much more than a passing fan. I had the cards, but not a single clue as to how I should play with them. I played the handheld games, but never enough to become a true master (I was always more of a Mario guy).

Though I was too young to see the original 1998 Pokémon film in theaters, I do recall watching it at a friend’s house on VHS when I was 7 years old. That’s a pretty long time ago by my standards, and the memory’s got me feeling pretty old. If you can sympathize, you can imagine my shock at learning that the franchise is coming out with its 20th film on Nov. 8. Not even "Harry Potter" got so many entries. (And, fortunately for us, Mario didn’t either.)

For the release of "Pokémon the Movie: I Choose You!," Pokémon has come up with a special promotion featuring the most famous pocket monster of them all: Pikachu. For a limited time, fans can receive a limited edition three-pack of Ash’s Pikachu promo cards with any Pokémon Trading Cards Game purchase of $25 or more. The offer is available through select retailers and online. 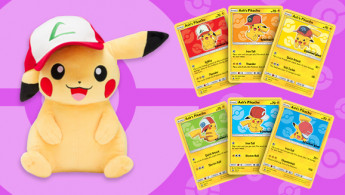 Pokémon is celebrating its 20th movie with collectible trading cards and a plush toy. | Credit: Pokemon

Also available is a plush Pikachu doll, complete with a Pokémon trainer hat that can be removed and worn.

While it’s hard to say whether the brand will be able to top the craze that was Pokémon Go anytime soon, it’s clear that this newest campaign is looking to reach a wide audience of fans. With Pikachu at the helm, it’s safe to say that the people will flock.

Are You Ready for the Boom?