Popeyes Finally Gives the People What They Want: Chicken Sandwich Merch (That Also Sold Out)

This year, news emerged that shook America to its core, pitting ordinary folks against one another and dominating the national discourse: the Popeyes chicken sandwich. (Obviously.) It launched over the summer, promptly sold out nationwide, and relaunched again in November to impossibly long drive-thru lines and the occasional parking lot brawl. (We discussed it here.) Demand has since returned to normal-ish, but considering its enormous and enduring popularity, there has been a baffling lack of chicken sandwich merch.

Last week, Popeyes announced a chicken sandwich ugly sweater, available through UglyChristmasSweater.com, a licensed apparel website. Unisex, fully knit and made from a 55/45 cotton/acrylic blend, the sweater has horizontal stripes of orange and white and is decked out in Popeyes logos, snowflakes, Christmas trees and, of course, chicken sandwiches. 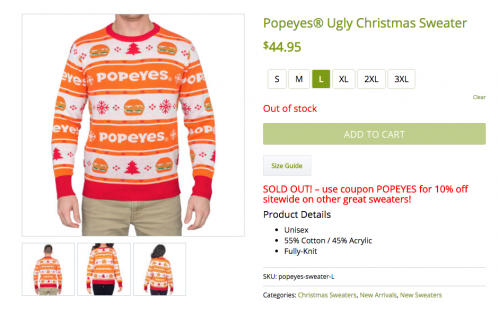 This appears to be the only piece of chicken sandwich merch available, and it's actually pretty incredible that it's all Popeyes has released thus far. It seems like there was plenty of time to put together at least a small collection of items between the time the sandwich first sold out and when it relaunched. The brand does have a modest online store, though there's no chicken sandwich merch to be found.

According to Business Insider, the sweater was limited edition and won't be restocked, which makes sense since we're only a few days away from Christmas. Still, with how quickly it sold out, it's clear that consumer appetite for all things chicken sandwich remains high, so we'd be surprised if Popeyes didn't have more merchandise up its battered, fried sleeve.

Until then, you'll have to settle for the actual sandwich. I wouldn't fight anyone in a parking lot over one, but honestly? It's pretty darn good.