Popovich-Kerr 2020 Isn't a Real Presidential Campaign, But It Is a Great Promotional Campaign

Gregg Popovich, head coach of the San Antonio Spurs, has a wide appeal. He’s one of the most successful coaches in NBA history, and has spoken at length (which is rare for him, at least to Craig Sager) on behalf of social issues. Because of this, some fans have decided that he might make a good candidate for public office. And, like any American president, he’d need a running mate. So, why not friend, former Spurs player and current Golden State Warriors head coach Steve Kerr?

From there, Popovich-Kerr 2020 was born.

OK, Pop and Kerr aren’t actually running for office (or at least haven’t made that public knowledge), but Popovich-Kerr merchandise has hit the internet, with a dedicated web store selling standard campaign items like T-shirts, tote bags, coffee mugs and stickers. 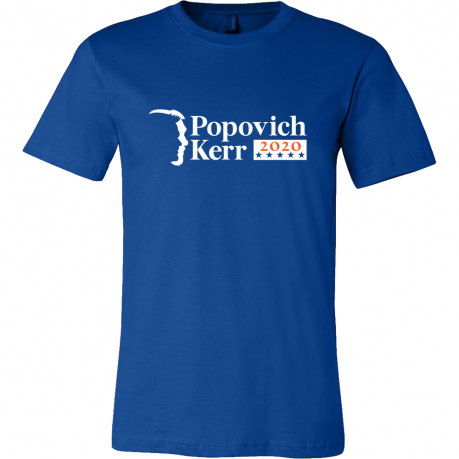 While the Popovich-Kerr movement was a grassroots campaign led by socially conscious basketball fans, Steve Kerr voiced his approval of it.

Heck, even Warriors star Steph Curry said he’s down with the idea.

“[Popovich] is great for the NBA and would be even better for the country probably,” he said.

The point of the merchandise site is ultimately to donate to a good cause. All of the proceeds go toward the different organizations, such as the ACLU, Council on American-Islamic Relations, NAACP, Union of Concerned Scientists and the International Rescue Committee.

It’s made its way around the NBA through other channels, too. Lakers coach Luke Walton (son of Hall of Famer Bill Walton) was spotted wearing a T-shirt at a volleyball tournament.

Coach Walton already angling for a spot in the cabinet. #PopovichKerr2020 pic.twitter.com/N5JnCyGm7N

While Pop and Kerr’s political ambitions might be fictional, this is a real way to urge sports fans to donate to good causes while giving them a fun promotional item that they can show off all the time. It appeals to fans of multiple teams. (Seriously, who doesn’t love Pop?) And, you know, it might be relevant in the future after all.

“This is as real as Coach Pop and Coach Kerr want to make it,” the site says in its FAQ section. “For now, we’re just happy to promote their collective vision of American ideals to the benefit of some worthy charities. However, if these guys want to set their sights outside the Western Conference towards Washington, D.C., we’d be happy to donate the Popovich Kerr 2020 fan base, logo and domain name towards a bonafide presidential campaign.”