Charleston has long enjoyed consideration as a prominent commerce location, with Promo Marketing solidifying that estimation just this week through a Power Meeting stop in South Carolina’s oldest and largest city. Its eponymous port plays a huge role in helping end-users to believe in Southern hospitality, but it also allows lawmakers to take to task those who would look to flout legal conventions. Officials at the seaport, which is celebrating its 75th anniversary, recently announced their summer seizure of more than $12 million in bogus water bottles looking to mimic a Manhattan-based entity’s aquatic holders. 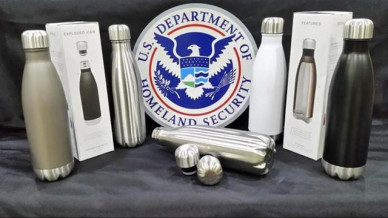 The Port of Charleston was busy this summer, nabbing these goods and nearly 350,000 more trademark-violating water bottles. (Image via US Customs and Border Protection)

Representing 10 percent of the Palmetto State’s economic output, the port, whose website says helps sustain 187,200 jobs throughout South Carolina, usually enables financial dreams to come true, but it dashed the hopes of an unnamed importer five times, seizing shipments of 345,597 plastic and stainless steel bottles totaling $12,341,820, according to the U.S. Customs and Border Protection Office of Field Operates (CBP). The containers had been the alleged culprit’s attempt to provide knockoff versions of products by S’well, a seven-year-old New York company whose offerings have proven a significant revenue generator.

“In each case, the importer of the merchandise was unable to provide requested paperwork demonstrating that the manufacturer of the goods was authorized to use a unique bottle shape which is a style patented and trademarked by the S’Well (sic) Bottle Company,” an accompanying CBP release said of the matter that, if it had gone undetected, would have seen the phonies from China head to a California-based drinkware distributor.

When port figures keep illegal transactions from occurring, they usually snare apparel or technology accessories, so this incident, especially because of the value the compromised goods, further proves that criminals are equal opportunity destroyers of rules and regulations. While this matter at the port, no stranger to controversy, did not lead to any rational heartbreak, it does remind us all of the interesting partnerships that exist among distributors and suppliers. In the simplest terms, the former should look to do business only with reputable members of the latter group. It sounds easy to do, and most people surely follow the tenets of good business, but we can never bottle every bad intention.