If there’s one key takeaway from Post Malone’s first collab with Crocs, it’s that his fans support any and all fashion choices the rapper puts out there. If there's another, it's that branded footwear is getting big. The 23-year-old artist launched his second collaboration, Post Malone x Crocs, last week, and there was a lot of hype leading up to it. The bright yellow shoes flew off the shelves, selling out within minutes.

After the first collaboration in November, fans were upset that they couldn’t get their hands on the merch fast enough before it was entirely sold out. Post Malone did mention that he would release a second collab in the near future, but did not disclose when that would be. He posted on his Instagram page, “my first collab with @crocs is SOLD OUT already! go to link in my bio to get updates on future releases.”

Thankfully, this time fans had a couple days notice before the new shoes went live on Crocs.com. They were also available at five Crocs retail stores in New York, Texas, Florida and California, according to Bustle.

One Twitter user tweeted, “I was so close & the site crashed :(.” This also happened to a few others who tried to purchase the Post Malone x Crocs from the website.

I was so close & the site crashed 🙁

Another Twitter user commented, “Stayed out of school just to cop a pair and I had it in my cart and the next sec they were sold out rip.” She also included an image of a letter to her school as to why she would not be attending yesterday. Clearly, fans took the collaboration very seriously.

Stayed out of school just to cop a pair and i had it in my cart and the next sec they were sold out rip pic.twitter.com/WPaZiY8ger

While the newest Posty Crocs differed from the last launch, they still gave off that typical edgy vibe Post Malone is known for. The previous Post Malone x Dimitri Clog was white and highlighted his signature yellow devil. The new versions were yellow with barbed wire around the shoe, a similar design to his album released this past April. Of course, what would Crocs be without Jibbitz charms? The rapper also dropped six new charms to go along with the vibrant yellow shoe. 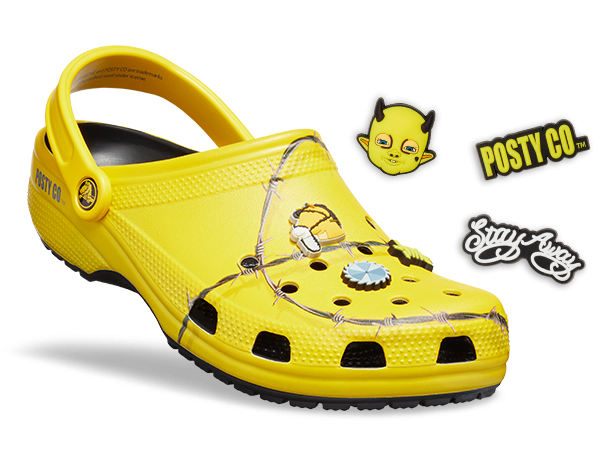 Post Malone definitely knows how to generate hype over this once (and possibly still) maligned shoe brand. We can certainly appreciate the uniqueness to both collaborations, as it’s something that relates to Post Malone instead of just a generic yellow shoe with his name across it. Plus, fans are already waiting to hear about future collaborations with Crocs. Who knows, maybe we can expect to see Post Malone's French bulldog, Branson, included on the next pair?