Griffin, who was introduced by PPAI Board member and friend Amy Rabideau, MAS, is a longtime industry professional and dedicated volunteer who is also well known in her community for her many years of service. In January, she was honored with PPAI’s H. Ted Olson Humanitarian Award in recognition of her volunteerism. Since she founded Accolades Inc. in 1990, Griffin has been an active member of PPAI and the Georgia Association of Promotional Products Professionals (GAPPP). She has served on numerous PPAI committees, task forces and advisory groups, including the Certification, Leadership and Membership Services committees. She is an industry advocate and speaker, and in 2016 she was recognized as a PPAI Fellow. 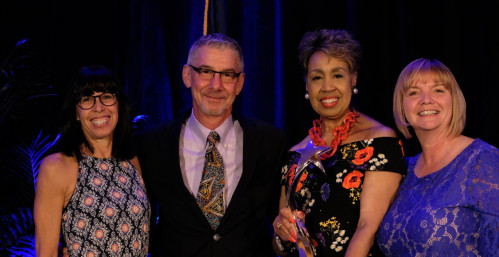 In accepting the honor, Griffin shared how thrilling it was to have been at the inaugural WLC in 2005 in Philadelphia, and now to be honored at the 2019 event.

“It warms my heart to see many new faces combined with industry veterans come together to continue leading, caring and sharing,” said Griffin, smiling, as she looked around the packed ballroom. “Collectively, we are WLC strong! I am forever grateful and deeply appreciative to PPAI for both prestigious honors. And this one, the Woman of Achievement, has special meaning because I am able to share it with you, my circle of sisters.”

Irene Kogutt, who passed away in 2017, founded Dart Manufacturing Company in 1965 in Dallas with her husband Sam. Together they owned it for 42 years. During her time in the promotional products industry, Kogutt was an active industry volunteer.

She served on the PPAI Board of Directors from 1994 to 1998, and was honored with the PPAI Distinguished Service Award in 1999. Under her leadership, the company won numerous Supplier Star and Supplier Achievement awards over the years. Kogutt was also a passionate volunteer and fundraiser for the Promotional Products Education Foundation, serving on its board from 1996 to 2000, and as chair in 1998. She was also a strong supporter and participant in education within the promotional products industry.

Her son, Michael Kogutt, was present to accept the award, and was introduced by friend and former PPAI Board Chair Jo-an Lantz, MAS, a member of the group that organized the first WLC.

In his remarks, he recounted his mother’s dedication to learning everything she could about the industry when the company got involved in 1984. She went on to immerse herself in industry education classes, and then began to volunteer for PPAI—a commitment that culminated with serving on the PPAI board and the PPEF board. In the latter role, he remembers her as a motivated and influential fundraiser for PPEF, and his examples of her dedication had the entire ballroom laughing.

“It was in her service on the Board of Directors of the Promotional Products College Education Foundation where Irene got her nickname, the 'Dragon Lady,’" said Kogutt with a smile. “She had to have been the most prolific cash fundraiser—or, more accurately, a pickpocket—in the organization’s history, and probably still is to this day.

"I certainly hope that Irene’s driven personality and leadership within the industry have, in some small way, helped each of you achieve new heights in your careers by her example and showing others that women can 'get ’er done,' as we like to say in Texas," he added. "You ladies certainly are taking over! I am very proud to see it, because I was raised and schooled by a strong woman.”

The Woman of Achievement Award has been presented annually since 2009, recognizing 13 women who have led the way in the advancement of women in the industry, and in tribute for their outstanding leadership and significant contributions within the industry and their communities. Griffin and Kogutt are the 14th and 15th recipients of the prestigious award.

Sponsor Content Employee Recognition: Not Just One Day, Every Day