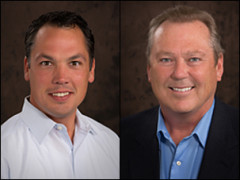 The PPAI RAC Volunteer of the Year Award is presented annually to regional association members who have demonstrated an outstanding level of volunteerism and leadership, and who have made significant and measurable contributions to a regional association. Burnett and Meyer exemplify the spirit of volunteerism and dedication to the promotional products industry at every level.

Burnett, currently serving as president-elect of the Michigan Promotional Professionals Association (MiPPA) board of directors, has a long history with the regional association and volunteerism in the industry. He previously sat on the association’s board from 2009 through 2013, and held several positions with the organization, including, from 2011 to 2012, board president and RAC delegate. He was MiPPA’s legislative chair from 2009 to 2010, chaired MiPPA Pilot Program rollout in 2011 and in 2013, and established the Executive Director Committee that brought on Paul Kiewiet, MAS+, the regional association’s current executive director.

Alongside his involvement with MiPPA, Burnett founded the Donna Hall Scholarship, to honor the late MiPPA executive director, and initiated district meetings outside the RAC Leadership Development Workshop (LDW) that are still part of regional associations’ planning and practice-sharing. He served on the RAC Board from 2010 to 2015, including a term as president in 2013.

At both the regional and national level, Meyer has been an active volunteer in the promotional products industry for more than 20 years. He served on the Upper Midwest Association of Promotional Professionals (UMAPP) from 2003 to 2011, including a term as president from 2009 to 2010; and is current board president of the Promotional Products Association Southwest (PPAS), having served on its board since 2016.

Meyer has volunteered with PPAI since 2003, beginning with time on the membership services advisory council in 2002. He is currently a member of the awards and recognition committee. In between, he has volunteered his time to practically all of the association’s committees, and served on the PPAI Board of Directors from 2009 to 2014. Meyer was the association’s board chair from 2012 to 2013.