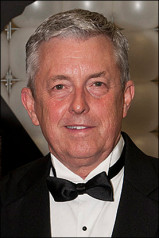 Promotional Products Association International (PPAI), Irving, Texas, has named H. Wayne Roberts, MAS, retired vice president of Wichita, Kansas-based Pioneer Balloon and past chair of the PPAI board of directors, as recipient of the 2017 PPAI H. Ted Olson Humanitarian Award. PPAI will present Roberts the award during the Chairman's Leadership Dinner at The PPAI Expo in Las Vegas on Jan. 9.

“Wayne is leaving a humanitarian legacy of caring and serving that is the ultimate role model for everyone to follow,” said Edwards. “His lifetime commitment of volunteering and leadership has touched and shaped all of us to a better life. He is the ultimate humanitarian. Wayne has achieved his success the old-fashioned way, with hard work, dedication and perseverance, making significant contributions to society and his fellow man. When you review and think of his career path, it’s astounding and pretty incredible.”

Named after the late H. Ted Olson, MAS, PPAI president emeritus, the award represents what Olson stood for—volunteerism inside and outside the promotional products industry. The award is presented annually to PPAI members who have shown long-standing empathy, devotion, and commitment to improving quality of life and bringing about change for the betterment of a community. Honorees exhibit exemplary devotion and volunteerism to nonprofit, civic, charitable and/or educational organizations committed to the needs of the communities they serve.

Roberts’ history in the promotional products industry began with Brown & Bigelow, where he served as a sales representative from 1976 to 1978 before moving to Bright of America in Summerville, W.V., where he was vice president of special markets. In 1981, he became Pioneer Balloon’s vice president, a position he held until his retirement in 2014. He also spent a year as Pioneer Balloon Canada’s CEO in Hamilton, Ontario in 1991.

He served on the PPAI Board from 1986 to 1991, serving as chair in 1990. While on the board, Roberts helped remake PPB magazine from a tabloid-sized publication to its current, more contemporary, form; initiated the association’s logo redesign that subsequently led to changing its name from Specialty Advertising Association International; and created PPAI’s first direct-mail program.

Roberts has a long history of dedicating his time, talents and energy in service to his community. In 1972, he was named president of the Clarksville, Va., Chamber of Commerce, where he worked to revitalize the chamber and increase its membership, establish an office in the town hall, and bring new businesses and economic generators to the area.

During that period, he also chaired the Mecklenberg County, Va., planning committee, and served on the Southside District Planning Commission and the Governor’s Electricity Cost Commission. The town of Clarksville elected Roberts mayor in 1976—at 26, he was the state’s youngest—and reelected him in 1978. The Clarksville Jaycees, of which he served as president in 1972, presented him with its Outstanding Man Award in 1972, and the Chamber of Commerce recognized his work with its Outstanding Service Award in 1972.

More recently, he served the Wichita Chamber of Commerce in numerous capacities, including chairing its Federal Affairs Committee from 1998 to 2007, its Military Committee from 2013 to 2014, and its Tanker Task Force from 2012 to 2014. The task force—comprised of members from the Governor’s Military Council, Wichita and Derby’s Chambers of Commerce, the Wichita Independent Business Association, the Sedgwick County Commission, the Mayor of Wichita’s Office, and other local leaders—was developed to help McConnell Air Force Base secure the next generation of tanker aircrafts.

Roberts spoke at several public meetings, was interviewed by several radio and television stations, and made presentations to military leadership at Scott Air Force Base and at the Pentagon on behalf of McConnell Air Force Base. In 2011, McConnell awarded Roberts the Golden Eagle award. Only the sixth Golden Eagle recognized by the base, the award recognizes non-military citizens who have shown character, personal dedication and support exemplifying the standards of the 22nd Air Refueling Wing.

Since 2005, Roberts has volunteered with the cat rescue organization Friends of Felines, serving as vice president from 2009 to 2014, and the University Congregational Church’s Hygiene Pantry from 2013 to 2014.

Even in retirement, Roberts’ devotion to his community continues. He and his wife recently moved to Bozeman, Mont., where he volunteers with the non-denominational charity God’s Garden—which grows and collects food for the local food bank—the pay-what-you-can restaurant Community Café and the food distribution center at Gallatin County Food Bank, as well as with the Gallatin Valley Land Trust, which develops and maintains hiking trails in the area.