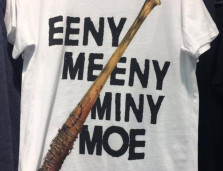 European retailer Primark faced major backlash after its release of a T-shirt for "The Walking Dead." According to BBC News, the T-shirt featured the phrase "Eeny Meeny Miny Moe" alongside a baseball bat wrapped in barbed wire. Critics said the T-shirt depicted a rhyme with a racist origin, and therefore should be pulled.

Primark's intention was to represent a notorious scene from "The Walking Dead." Seemingly, the company did not know about the phrase's racist history.

"The T-shirt in question is licensed merchandise for the U.S. television series, 'The Walking Dead,' and the quote and image are taken directly from the show," Primark said in a statement. "Any offense caused by its design was wholly unintentional and Primark sincerely apologizes for this."

In response to the backlash, Primark pulled the T-shirt from its stores.

While the T-shirt garnered plenty of criticism, there has also been a surge of critics attacking the original commentators. Many are saying shoppers are too sensitive, and that Primark should not have pulled the tees.